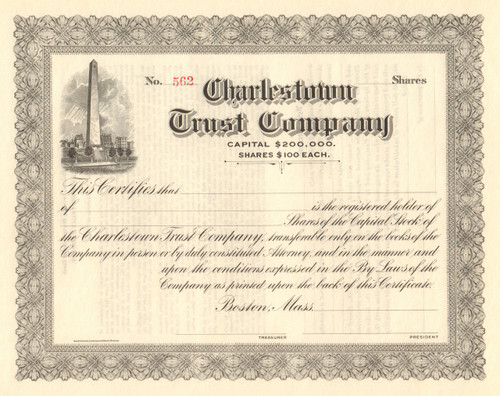 Wonderful and uncommon banking piece featuring the Bunker Hill Monument in the upper left. Very unique piece that is unissued but circa 1911 from company records,  Very clean and crisp.

Incorporated in Boston, Massachusetts in February 1911, the company went bankrupt in December of1931 as a result of the Great Depression financial chaos.

Charlestown a part of the city of Boston, Massachusetts. Founded in 1628, Charlestown was originally a separate city and the first capital of the Massachusetts Bay Colony; it was annexed by Boston in 1874. Charlestown is located northeast of Boston proper on a peninsula extending southeast between the Charles River and the Mystic River. It now has a substantial Irish-American population.  The geographic extent of Charlestown has changed dramatically from its colonial ancestor. Landfill operations have expanded Boston into the Back Bay, lowered hills, and expanded Charlestown, eliminating the narrow Charlestown Neck that connected the northwest end of the Charlestown Peninsula to the mainland.

On June 17, 1775 the Charlestown Peninsula was the site of the Battle of Bunker Hill. Bunker Hill was near the northwest end of the peninsula, close to Charlestown neck and about a mile from the Charles River. The battle actually took place on Breed's Hill, which overlooked the harbor and the town and was only about 400 yards from the end of the peninsula. The city, including its wharfs and dockyards, was destroyed by fire during the battle.

Charlestown is the home of Bunker Hill and the USS Constitution. Charlestown was also the birthplace of inventor Samuel F. B. Morse.

The Bunker Hill Monument is a 221-foot granite obelisk erected between 1827 and 1843 in Charlestown, Massachusetts.  The monument was erected to memorialize the Battle of Bunker Hill. The monument was first created 1794 by King Solomon's Lodge of Masons and was initially a 18-foot wooden pillar with a gilt urn.  Famed nineteenth-century philanthropist Amos Lawrence contributed $10,000 to fund the building of the current monument.

Bunker Hill was a battle of the American Revolutionary War that took place on June 17, 1775 during the Siege of Boston. Although it is known as Bunker Hill, most of the action was on Breed's Hill. British forces under General Howe drove the American militia from fortified positions on Breed's Hill and Bunker Hill. The battle was a Pyrrhic victory for Howe. His immediate objective was achieved, but the attack demonstrated the American will to stand in pitched battle, caused substantial British casualties, and did not change the status of the siege. After the battle, British General Henry Clinton remarked in his diary that "....another such victory and we are utterly undone."

The British had taken the ground, but at a stiff cost; 1,054 were shot (226 dead and 828 wounded), and a disproportionate number of these were officers. The American losses were only about 450, of whom 140 were killed (including Joseph Warren), and 30 captured, and most American losses came during the withdrawal.  British dead and wounded included almost all of their officers. Of General Howe's entire field staff; he was the only one not shot. Major Pitcairn was dead, and Colonel James Abercrombie fatally wounded. The American withdrawal and British advance swept right through to include the entire peninsula, Bunker Hill as well as Breed's Hill. But the number of Americans to be faced in new positions hastily created by Putnam on the mainland, the end of the day, and the exhaustion of his troops removed any chance Howe had of advancing on Cambridge and breaking the siege.

The attitude of the British was significantly changed, both individually and as a government. Thomas Gage was soon recalled, and would be replaced by General Howe. Howe himself lost the daring he had shown at Louisbourg, and was cautious through the rest of his service. Gage's report to the cabinet repeated his earlier warnings that "a large army must at length be employed to reduce these people" and would require "the hiring of foreign troops."

A famous saying came from this battle: "Don't fire till you see the whites of their eyes". However, it is uncertain as to who said it, since various writers attribute it to Stark, Prescott, and Gridley.