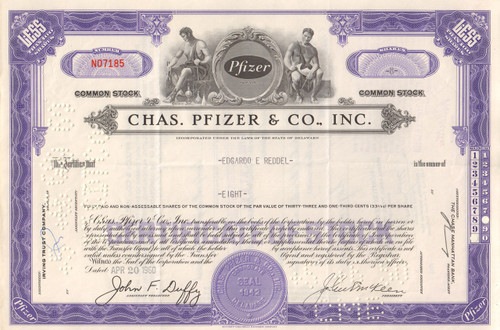 Pfizer was founded by cousins Charles Pfizer and Charles F. Erhart in New York City in 1849 as a manufacturer of fine chemicals. Pfizer's discovery of Terramycin (oxytetracycline) in 1950 put it on a path towards becoming a research-based pharmaceutical company. Pfizer has made numerous acquisitions, including Warner–Lambert in 2000, Pharmacia in 2003 and Wyeth in 2009. The Wyeth acquisition was the largest of the three at $68 billion.  Pfizer is listed on the New York Stock Exchange, and its shares have been a component of the Dow Jones Industrial Average since April 2004.

Pfizer is named after German-American cousins Charles Pfizer and Charles F. Erhart (originally from Ludwigsburg, Germany) who launched a chemicals business, Charles Pfizer and Company, from a building at the intersection of Harrison Avenue and Bartlett Street in Williamsburg, Brooklyn, in 1849. There, they produced an antiparasitic called santonin. This was an immediate success, although it was the production of citric acid that really kick-started Pfizer's growth in the 1880s. Pfizer continued to buy property to expand its lab and factory on the block bounded by Bartlett Street; Harrison Avenue; Gerry Street; and Flushing Avenue.

World War I caused a shortage of calcium citrate that Pfizer imported from Italy for the manufacture of citric acid, and the company began a search for an alternative supply. Pfizer chemists learned of a fungus that ferments sugar to citric acid and were able to commercialize production of citric acid from this source in 1919. As a result, Pfizer developed expertise in fermentation technology. These skills were applied to the mass production of the antibiotic penicillin during World War II in response to the need of the U.S. government to treat injured Allied soldiers; most of the penicillin that went ashore with the troops on D-Day was made by Pfizer.

In the 1940s, penicillin became very inexpensive. As a result, Pfizer searched for new antibiotics with greater profit potential. Pfizer's discovery and commercialization of Terramycin in 1950 changed the company from a manufacturer of fine chemicals to a research-based pharmaceutical company. To augment its research in fermentation technology, Pfizer developed a drug discovery program focusing on in vitro synthesis. Pfizer also established an animal health division in 1959 with an 700-acre farm and research facility in Terre Haute, Indiana.

Pfizer has recently grown by mergers, including those with Warner–Lambert (2000), Pharmacia (2003), and Wyeth (2009).  On June 26, 2006, Pfizer announced that it would sell its Consumer Healthcare unit (manufacturer of Listerine, Nicorette, Visine, Sudafed and Neosporin) to Johnson & Johnson for $16.6 billion.