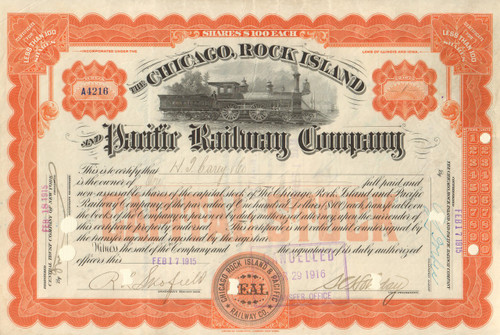 The Chicago, Rock Island and Pacific Railroad was a prominent (Class I) railroad in the midwestern United States, commonly known as the "Rock Island." In 1854 when the line connected the Mississippi to Chicago and the East Coast, the event was marked by a large promotional voyage called the Grand Excursion. In 1856, the line crossed the Government Bridge, the first railroad bridge across the Mississippi, connecting farms in Iowa and beyond to Chicago. By 1900 it was playing a major role in the Midwestern agrarian economy, serving 1700 grain elevators in hundreds of small communities. The line's abandonment in 1980 ranks as the longest and most complicated in U.S. railroad history.

In 1847 the Rock Island & La Salle Railroad Company was chartered to build between Rock Island, Illinois, on the Mississippi River, and La Salle, where connections would be made with the Illinois and Michigan Canal to Chicago. Contractor Henry Farnam persuaded the organizers to extend the railroad as far as Chicago to connect with other railroads. The charter was so amended, and the railroad was renamed the Chicago & Rock Island (C&RI). Construction began on October 1851.

The line was opened to Rock Island on February 22, 1854, and the contractors turned it over to the company in July of that year. By then the railroad had an agreement with the Northern Indiana Railroad (later part of the New York Central Railroad) for joint terminal facilities in Chicago; a branch from Bureau, Illinois, south to Peoria was nearly complete; and the Mississippi & Missouri Railroad (M&M) had been chartered in Iowa to build a railroad from Davenport, across the Mississippi River from Rock Island, to Council Bluffs, with branches south through Muscatine and north through Cedar Rapids.

In 1854, the railroad was made famous by a promotional voyage called the Grand Excursion, which marked the first railway connection between the East Coast and the Mississippi. Over a thousand people traveled in two trains from Chicago to Rock Island, where they boarded five steamboats for a trip up the river.

A bridge across the Mississippi was necessary to connect the C&RI and M&M. The Mississippi had not yet been spanned, and the immediate reaction to the proposed railroad bridge was that it would be a hazard to navigation. However, the Government Bridge opened on April 21, 1856. On May 6, 1856 the steamboat Effie Afton, which usually plied the New Orleans-Louisville run, cleared the open draw span and veered aside, turned around, rammed one of the piers, then suddenly and suspiciously burst into flames.

The M&M, far behind its construction schedule, was sold to the newly incorporated Chicago, Rock Island & Pacific Railroad on July 9, 1866. On August 20 that company consolidated with the C&RI to form the Chicago, Rock Island & Pacific Railroad. The line reached Des Moines a year later and arrived at Council Bluffs on May 11, 1869 — one day after completion of the Union Pacific (UP) and Central Pacific railroads from Council Bluffs to the West Coast. The Rock Island was not the first railroad into Council Bluffs; the Cedar Rapids & Missouri River Railroad had reached there more than two years earlier and established ties with UP.

In 1901, control of the Rock Island was taken over by the Reid-Moore syndicate: Daniel G. Reed, William H. Moore, his brother James H. Moore, and William Leeds, men who had put together the National Biscuit, Diamond Match, and American Can companies. The railroad continued to burgeon. It acquired the Choctaw, Oklahoma & Gulf Railroad, (CO&G) a line from Memphis, Tennessee, through Little Rock, Arkansas, and Oklahoma City to Elk City in western Oklahoma, and the 70 mi St. Louis, Kansas City & Colorado Railroad.

At the same time the controlling syndicate, which now included B. F. Yoakum, was busy acquiring control of the Chicago & Alton Railroad, the Chicago & Eastern Illinois Railroad, the Toledo, St. Louis & Western Railroad, and the St. Louis–San Francisco Railway (SLSF) through holding companies and exchanges of stock. By 1909, though, the interest due on SLSF bonds far exceeded dividends received on SLSF stock — none. B. F. Yoakum bought Rock Island's SLSF stock at a considerable loss to the Rock Island.

New management took over in the 1920s and placed considerable emphasis on paying stock dividends to the detriment of maintaining the property. Edward N. Brown, chairman of the board of the SLSF, began to buy Rock Island stock with the thought of using dividends to bolster the SLSF's situation. Soon Brown was chairman of Rock Island's executive committee. In 1927, Rock Island declared a stock dividend of 5%; in 1928, 6% and in 1929, 7% — even though Rock Island's annual interest on its debt was nearly $14 million. In 1930 Brown began to secretly acquire SLSF stock for the Rock Island. Revenue dropped as the Great Depression deepened. Then Rock Island's territory was struck with wheat crop failures and the effects of the Dust Bowl. The Rock Island declared bankruptcy on June 7, 1933.

Edward M. Durham, vice-president of the Missouri Pacific Railroad, took over as CEO in December 1935. He brought in John D. Farrington, general manager of the Fort Worth & Denver Railway, as operating officer in May 1936. Farrington started a scrap drive to finance a rail relay program and purchased ten diesel switchers and six diesel-powered Rocket streamliners. His program included line relocations between Davenport and Kansas City and a new bridge over the Cimarron River just east of Liberal, Kansas. The railroad turned a profit in 1941. Durhan retired in July 1942 and Farrington became CEO.

In 1964 Ben Heineman, chairman of the C&NW, proposed merging the C&NW, the Rock Island, and the Milwaukee Road into an Upper Midwest system and selling the lines south of Kansas City to the Atchison, Topeka & Santa Fe Railway. The Union Pacific Railroad (UP) made a counterproposal; merger, which would put the UP into Chicago. 1964 was Rock Island's last year of profitability.

UP said it would have to re-evaluate the merger, since the Rock Island of 1974 was not the Rock Island of 1964. Rock Island filed for bankruptcy on March 17, 1975, with William M. Gibbons being appointed receiver. Not surprisingly on August 4 of that year UP withdrew its merger offer and the ICC dismissed the case on July 10, 1976. By then the Rock Island was in terrible shape. The railroad took on a ramshackle appearance and derailments occurred frequently.  A new management headed by former Federal Railway Administration official John W. Ingram did its best, introducing a new image of sky blue and white and appointing John W. Barriger III, by then 76 years old, as Senior Traveling Freight Agent (Barriger's own title) and consultant.

Rock Island's clerks walked off their jobs on August 28, 1979, over a pay dispute, and United Transportation Union (UTU) members followed the next day. President Jimmy Carter issued an order September 20 creating an emergency board to settle the dispute. The UTU members then returned to their jobs, but members of the Brotherhood of Railway and Airline Clerks stayed off. On September 26 the Kansas City Terminal Railway (KCT) was ordered by the ICC to operate the railroad. KCT's owners plus DRG&W and SP began operating the Rock Island. On March 2, 1980, the ICC refused to extend its directed service order, and the Rock Island ceased operation March 31, 1980. Rock Island's locomotives, rail cars, equipment, tracks, and real estate were sold to other railroads or scrapped. Gibbons was able to raise more than $500 million in the liquidation, paying off all the railroad's creditors, bondholders and all other debts in full at face value with interest.

The estate of the Chicago, Rock Island & Pacific Railroad expired on June 1, 1984. All assets had been sold, all debts had been paid, and the former railroad found itself with a large amount of cash. The name of the company was changed to Chicago Pacific Corporation to further distance itself from the defunct railroad and their first purchase was The Hoover Company. In 1988, the company would be acquired by the Maytag Corporation.

Ironically, through the mega mergers of the 1990s UP ultimately ended up owning and operating more of the Rock Island than it would have acquired in its attempted 1964 merger. There are two lines it currently does not own or operate regularly, other than detours. The first is the Chicago-Omaha main line, the one that drove it to merge with the Rock Island in the first place and is now owned by the Iowa Interstate Railroad. The second is the St. Louis-Kansas City line, owned by the Ameren Corporation and leased to the Central Midland Railway.