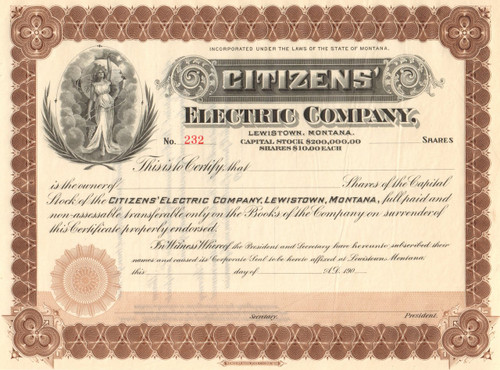 Nice early electric utility. Very nice left vignette of a classical  female figure in the clouds with a globe of the earth behind. Unissued and not cancelled. Dated 190_. Circa 1906 from issued examples.

Pierre Berger is credited with being the founder of Lewistown. Berger, along with his wife Judith Wilkie Berger, son Isadore Berger, Isaie Berger, Jean Baptiste Berger and Jacques Berger, as well as several other families made the trek into the Lewistown area in 1879. Francis Janeaux came with the second group. Janeaux founded the first public school house in 1883. This date is considered the official "founding" of Lewistown. Lewistown was also the site of a gold rush when gold was discovered in the nearby Judith Mountains in 1880. Before the gold rush, Maiden was the largest city in central Montana. When the gold supply ran out, many of the miners gained new employment in Lewistown and settled there permanently.

Lewistown was the eastern terminus of the Montana Railroad which connected with Lombard, Montana, a distance of approximately 157 miles. The railroad connected with the national railway network via a connection with the Northern Pacific Railway at Lombard. The Montana Railroad line was constructed between 1895 and 1903, and operated independently until 1908, when it was acquired by the Chicago, Milwaukee, St. Paul and Pacific Railroad ("the Milwaukee Road").