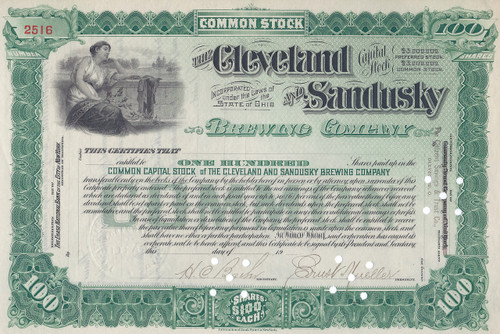 Great side vignette of Greek female seated in front of a country scene.  Unissued with the exception of one piece issued and cancelled in 1906. Rare Ohio brewing cert at a great price. Cleveland and Sandusky Brewing made and distribute Old Timers Ale, New York Special Brew, GB Lager, and Crystal Rock Beer.

On March 8, 1896, the Stang Brewing Co. merged with the Kuebeler Brewing and Malting Co. one mile away, forming the Kuebeler-Stang Brewing & Malting Co. Stang became the vice-president of this combine (Jacob Kuebeler was president), which had $700,000 in capital stock, and a collective annual capacity of 350,000 barrels. This entity lasted for less than two years before becoming a part of the Cleveland & Sandusky Brewing Co. conglomerate on January 1, 1898. The company would eventually consist of eleven breweries in three cities

Early in 1898, nine breweries in Cleveland and two in Sandusky, Ohio combined to form the Cleveland & Sandusky Brewing Company. Jacob and August Kuebeler established the original J. Kuebeler and Company Brewery at the west end of Tiffin Avenue in 1867. The Stang Brewing Company, established by Frank Stang in 1880 on King Street, was completely destroyed in an 1891 fire. The Kuebeler Company was nearly destroyed by fire in the following year. Kuebeler incorporated what remained of its original building into a new structure. During Stang's rebuilding, the Kuebeler Brewery filled Stang's orders. In 1869, the Stang Company consolidated with Kuebeler, adopting the name Kuebeler-Stang Brewing & Malting Company. The two plants operated as part of the Cleveland & Sandusky Brewing Company until Prohibition (1920 to 1933); only the Stang plant operated afterwards.

Upon the enactment of statewide Prohibition in 1919, the Kuebeler plant was closed, leaving the Stang plant as the city's only surviving brewery. It continued to operate throughout the next fourteen years, capitalizing on the name recognition of its flagship product by renaming itself as the Crystal Rock Products Co. (still a subsidiary of the Cleveland & Sandusky Co.) Crystal Rock Cereal Beverage, Deerfield Ginger Ale, and other soft drinks were produced through the end of Prohibition with a moderate degree of success. Stang had left the company by 1923 to manage a local wine company, after which the plant was managed by Roy Homegardner, who had been with the company since 1902.

With the repeal of Prohibition, the old Stang plant was refurbished as one of only two surviving branches of the Cleveland-Sandusky Brewing Co. (the other being the Fishel plant in Cleveland). In July 1933 it became the first of the two breweries to release beer to the public, when Gold Bond Beer was shipped east for sale in the Cleveland market, followed soon by Crystal Rock Beer, and three new brands, Old Timers and Buccaneer Ales and New York Special Beer.

Brewing operations continued successfully for two years until all of the plant's eighty workers went on strike in April 1935, in connection with a massive brewery worker strike in Cleveland (see the section on Cuyahoga County for more on the strike). The conflict was the culmination of a long standing battle for jurisdiction over brewery truck drivers, who had previously been members of the brewery workers’ union, but who had recently switched allegiance to the teamsters’ union. While the brewery owners were essentially neutral in this conflict, they ultimately paid the greatest price, as the breweries operated at a reduced capacity with replacement workers for several months.

The old Stang plant was particularly hard-hit, as clashes between strikers and replacement workers turned violent, with several people being injured in early May when a tear gas bomb was thrown. Rocks and stones thrown at the brewery broke windows and lights, and the plant shut down completely for two weeks. By the end of that month, manager Roy Homegardner announced that the plant would close permanently and the equipment would immediately be dismantled and moved to the main Cleveland plant (the only one remaining in the company). By the time the strike finally ended in November, Sandusky's brewing history had come to a sad end.

The brewery stood empty for two years until the buildings and remaining equipment were purchased by local businessman Elliott M. Bender for $100,000. His plan was to sell $300,000 worth of stock in order to make the brewery operable again by the following summer. This plan never took shape, however, and as late as 1938, it was announced that the Sandusky Chamber of Commerce was still looking for a way to get the brewery back in operation. Instead, the plant remained empty for nearly a decade before the entire complex was razed in 1947, leaving no remains today. The Crystal Rock, Old Timers, and Gold Bond brands continued to be produced in Cleveland until the main plant closed in 1962, after which they were produced by the International Breweries Co. in Findlay, OH. and Buffalo, NY. until 1966. The brands were then produced by both the Meister-Brau/Buckeye Brewing Co. in Toledo and the Cumberland Brewing Co. in Cumberland, MD., each of which had rights to the Cleveland-Sandusky name, until approximately 1969. Following a gap of thirty years, the Crystal Rock name resurfaced in 1999 as a brand of Dopple Bock Lager Beer, brewed by the Frontwaters microbrewery in nearby Marblehead (see the section on Ottawa County). The name also lives on at the Crystal Rock campground, near the old spring several miles southwest of Sandusky, which uses the familiar logo to this day. [an error occurred while processing this directive]

Independent Cleveland brewers suffered greatly as a result of the combine's ruthless competitive tactics. When Ohio's Attorney General charged that the Cleveland & Sandusky Brewing Company was operating illegally as a trust, George F. Gund (one of Cleveland’s most famous names and at the time a brewer himself) was called upon to testify against the combine. He told of Cleveland & Sandusky's practice of buying saloon properties where rival beer was being sold, then evicting saloonkeepers who refused to handle only the combine's beer. He also testified that saloonkeepers were offered interest-free loans in exchange for agreements to sell only Cleveland & Sandusky beer. In the end, the combine was, indeed, found to be in violation of anti-trust laws, but was merely fined a small sum and allowed to continue in business.