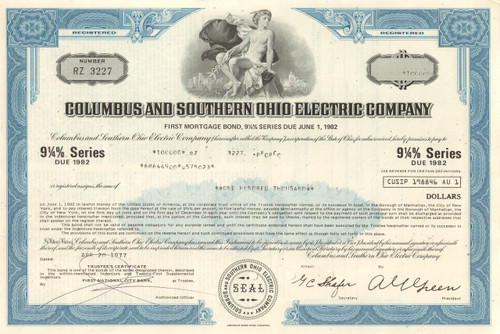 Great electric utility company bond with a nice vignette of Mercury seated atop a hill with city scenes in the background.  Issued and cancelled. Dated 1970's.

American Electric Power (AEP) is a major investor-owner electric utility in the United States, delivering electricity to more than 5 million customers in 11 states.

AEP has come under criticism in many of the states they operate in for attacking rooftop solar. They have specifically attempted to halt distributed solar in Louisiana, Arkansas, Oklahoma, West Virginia, Indiana, Kentucky, and Ohio.

AEP Ohio
It is made up of the former Ohio Power and Columbus Southern Power. Wheeling Electric Power (serving Wheeling, West Virginia) is operated as a de facto part of AEP Ohio.

Kentucky Power
Kentucky Power serves most of Eastern Kentucky, the area abutting the Appalachian Power service area, including communities of Pikeville, Hazard and Ashland. It is headquartered in Frankfort, Kentucky.

Public Service Company of Oklahoma
PSO was one of the four CSW Operating Companies when CSW merged with AEP. Incorporated in 1913, PSO serves approximately 540,000 customers in eastern and southwestern Oklahoma. Its headquarters are in Tulsa. PSO has 4,269 megawatts of generating capacity and provides electricity to 232 cities and towns across a service area encompassing 30,000 square miles.

Other subsidiaries:
AEP also bought much of the town of Cheshire, Ohio, where the Gavin Power Plant is located, due to pollution issues. In 2004, AEP announced their plans to build one, or more, integrated gasification combined cycle (IGCC) coal-fired power plant which is expected to reduce emissions while providing additional electricity capacity to the customers served by AEP. The company also operates its own inland barge line, AEP River Operations (formerly MEMCO Barge Line), and owns major tracts of land throughout its service areas. In August 2008, AEP has formed a joint venture company with Duke Energy to build and own new electric transmission assets. It is the largest shareholder in the Ohio Valley Electric Corporation (OVEC). OVEC is an associate company of AEP, not a subsidiary, because AEP owns less than half of it.