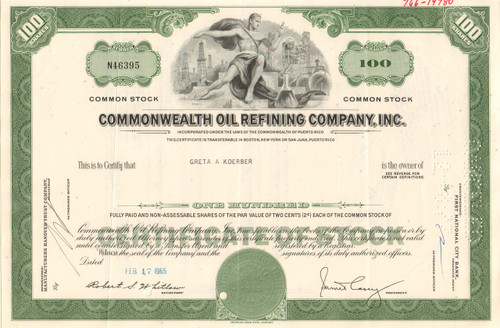 Great refinery company stock with a nice vignette of a classical male figure with lab equipment in front of oil wells and a refinery.  Issued and cancelled. Dated 1970's.

Incorporated in 1953 in New York and Puerto Rico. Commonwealth Oil Refining Company, Inc. (CORCO) was an oil refinery established in the towns of Peñuelas and Guayanilla in Puerto Rico in the middle of the 20th century. The project started as part of Operation Bootstrap with the first unit being constructed in 1954. The company started operations in 1955 and was finally incorporated on May 19, 1963. Corco represented an investment of $25 million and had the capacity to refine 23,500 barrels of oil daily. Hugo David Storer Tavarez was one of the men in charge of the CORCO being established in Puerto Rico.

The refinery is located in an 800-acre site, and consists of numerous storage tanks and waste treatment units typical of petroleum refineries. CORCO has been inactive since 1982, and now functions as a terminal for the marine transportation and land-based storage of crude oil and petroleum products.

After the refinery ceased operations, an entity called Desarrollo Integral del Sur (South Integral Development) began developing a long-term plan for the reuse of the terrains and properties.