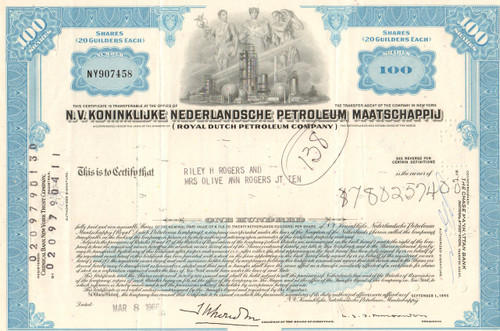 In February 1907, the Royal Dutch Shell Group was created through the amalgamation of two rival companies: Royal Dutch Petroleum Company and the "Shell" Transport and Trading Company Ltd of the United Kingdom. It was a move largely driven by the need to compete globally with Standard Oil. Royal Dutch Petroleum Company was a Dutch company founded in 1890 to develop an oilfield in Sumatra. For various reasons, the new firm operated as a dual-listed company, whereby the merging companies maintained their legal existence, but operated as a single-unit partnership for business purposes. The terms of the merger gave 60 percent ownership of the new group to the Dutch arm and 40 percent to the British.

The "Shell" Transport and Trading Company (the quotation marks were part of the legal name) was a British company, founded in 1897 by Marcus Samuel, 1st Viscount Bearsted, and his brother Samuel Samuel. Their father had owned an antique company in Houndsditch, London, which expanded in 1833 to import and sell sea-shells, after which the company "Shell" took its name.

National patriotic sensibilities would not permit a full-scale merger or takeover of either of the two companies. The Dutch company, Koninklijke Nederlandsche Petroleum Maatschappij, was in charge at The Hague of production and manufacture. A British company was formed, called the Anglo-Saxon Petroleum Company, based in London, to direct the transport and storage of the products.

In 1919, Shell took control of the Mexican Eagle Petroleum Company and in 1921 formed Shell-Mex Limited which marketed products under the "Shell" and "Eagle" brands in the United Kingdom. In 1929, Shell Chemicals was founded. By the end of the 1920s, Shell was the world's leading oil company, producing 11 percent of the world's crude oil supply and owning 10 percent of its tanker tonnage. Shell Mex House was completed in 1931, and was the head office for Shell's marketing activity worldwide. In 1932, partly in response to the difficult economic conditions of the times, Shell-Mex merged its UK marketing operations with those of British Petroleum to create Shell-Mex and BP, a company that traded until the brands separated in 1975. Royal Dutch Company ranked 79th among United States corporations in the value of World War II military production contracts.

The 1930s saw Shell's Mexican assets seized by the local government. After the invasion of the Netherlands by Germany in 1940, the head office of the Dutch companies was moved to Curacao.

Around 1952, Shell was the first company to purchase and use a computer in the Netherlands. The computer, a Ferranti Mark 1*, was assembled and used at the Shell laboratory in Amsterdam. In 1970 Shell acquired the mining company Billiton, which it subsequently sold in 1994 and now forms part of BHP Billiton.