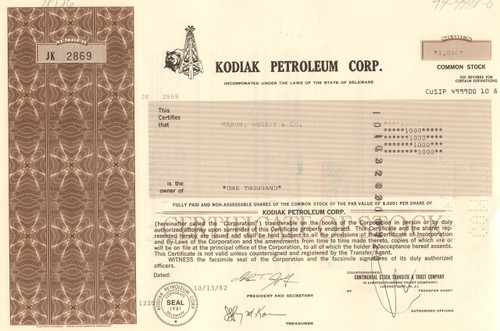 Neat oil stock with a fun vignette of a Kodiak bear behind a flowing oil well.  Issued and cancelled.  Dated 1982 right after their incorporation.

The company financed and owned drilling operations in Oklahoma, Colorado, and Texas.  the company first started operations in Alaska and Northwest Canada but expanded for well diversification. Declining revenue caused the company to dissolve by the mid 1990's. Kodiak Petroleum Corp. was registered in New York on September 03, 1982. Their headquarters are in Arutt Nachamie Benjamin 292 Madison Ave. New York New York, NY 10017. Kodiak Petroleum Corp. is currently inactive since 1995.