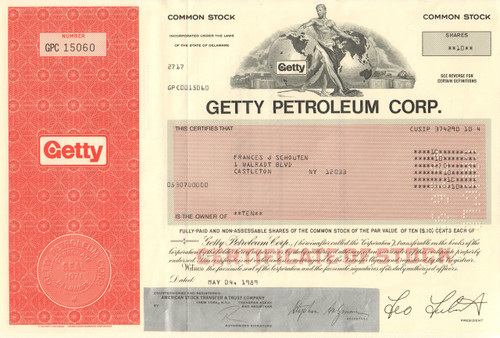 Uncommon oil collectible. Nice vignette of a classical male figure in front of two hemispheres of the earth with the Getty logo and oil refinery scenes in the background.  issued and cancelled. Dated 1989-1990.

Getty Oil is an American oil marketing company with its origins as part of the large integrated oil company founded by the father of J. Paul Getty. As of 2012, certain stations have been closed or sold to other brands. However some stations still exist across the nation today.

Starting in 1949, J. Paul Getty negotiated a series of lucrative oil leases with Saudi Arabia and Kuwait. Gordon Getty and his family inherited a 40% interest in the company when J. Paul Getty died in 1976. In 1984, after entering into a binding agreement to sell Getty and its 2.3-billion-barrel stockpile of proven oil reserves to Pennzoil, heir Gordon Getty struck a dramatic deal to sell the company to Texaco.

On November 19, 1985, in the case of Texaco, Inc. v. Pennzoil, Co., Pennzoil won a US$10.53 billion verdict against Texaco in the largest civil verdict in U.S. history as a result of the violation of the binding agreement. While the reserves were sold, only some of the refineries changed hands, and Getty continued to exist as a downstream entity. Getty gas stations in the Northeast were sold off as a condition of the buyout. The company became known as Getty Petroleum Marketing Inc.

Getty Petroleum Marketing was sold to Lukoil and Mobil in certain areas and then in 2011 to Norwegian investors before filing for bankruptcy protection in 2013. The Australian company Westerhoudt AG, run by Olaf Westerhoudt, acquired the rights to the Getty Oil name in 2007 for an undisclosed amount.

At one point, Getty Oil owned a majority stake of ESPN, before it was sold to the American Broadcasting Company in 1984.