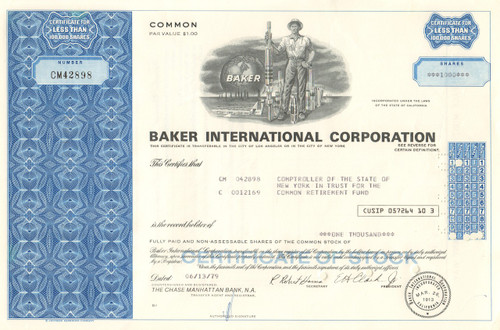 Fun collectible stock with a neat vignette of oil worker holding the company's product in front of a refinery and oil fields.  Baker name is placed across a globe of the earth.  Issued and cancelled. Dated in the 1970's.

Baker International merged with Hughes Tool Company to form Baker Hughes Incorporated in 1987.  Baker Hughes is one of the world's largest oilfield services companies. It operates in over 90 countries, providing the oil and gas industry with products and services for drilling, formation evaluation, completion, production and reservoir consulting. In November 2014, it was announced that Baker Hughes had entered talks with Halliburton over a merger deal valued at $34.6 Billion.

Baker International was formed by Reuben C. Baker, who developed a Casing shoe, that revolutionized cable tool drilling. In July 1907, R.C. Baker, a 34 year-old inventor and entrepreneur in Coalinga, California, was granted a U.S. patent for a casing shoe that enabled drillers to efficiently run casing and cement it in oil wells. This innovation launched the business that would become Baker Oil Tools and Baker Hughes Incorporated. Mr. Baker had arrived in the California oilfield in 1895 with 95 cents in his pocket and dreams of making his fortune in the Los Angeles oil boom. Subsequently, he hauled oil for drillers with a team of horses and became a drilling contractor and an oil wildcatter before achieving success as an innovator in oilfield equipment. In 1928, Baker Casing Shoe Company changed its name to Baker Oil Tools, Inc., to reflect its product line of completion, cementing and fishing equipment.

In early 1956, during one of the most successful periods in the company's history, Reuben C. Baker retired as President of Baker Oil Tools. A few weeks later, he died after a brief illness at the age of 85 and was succeeded by his long-time associate Ted Sutter.

INTEQ also originally incorporated the drilling fluids division of Baker Hughes which consisted of Milpark and others. This division was called 'INTEQ drilling fluids' which provided the premier brands in oil and gas well drilling muds and wellbore cleaning fluids

In November 2014 Halliburton proposed the acquisition of Baker Hughes, which would unite the second and third largest U.S. providers of oil field services. Baker Hughes' board of Directors accepted the offer.