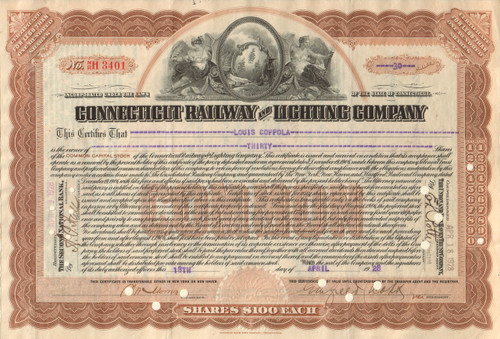 Founded in 1895 was the Gas Supply Company, it was authorized by legislature to manufacture and distribute gas fuel throughout Fairfield County, Connecticut. The name of the Gas Supply Company was changed in 1899 to Connecticut Lighting and Power Company, and its authority expanded to generating and distributing electricity. In 1901, the name was changed to Connecticut Railway and Lighting Company. A number of streetcar and electric utility companies were acquired during the intervening years, building up a large system in the Naugatuck Valley and surrounding region. All of the property controlled by CR&L was leased to the Consolidated Railway in 1906, which in turn was leased to the Connecticut Company.

Connecticut Railway and Lighting Company resumed independent operation of its lines in 1936, but worked quickly to convert the remaining streetcar lines to bus operation by 1937. Stockholders wished to get out of the transit business, and so those operations were sold off in 1943. A number of under-performing bus routes were discontinued over the years until all service was suspended in 1972. The transit franchises were succeeded by Connecticut Transit, except in Bridgeport by the Greater Bridgeport Transportation Authority after its formation in 1975.