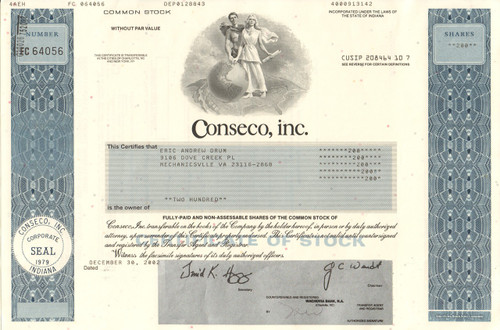 Uncommon modern insurance stock collectible.  Interesting vignette of two classical figures standing with a globe of the earth on a map of the United States.  Issued and not cancelled. Dated 2002 (year of bankruptcy).

CNO was incorporated in 1979 as Conseco, Inc. It began insurance operations in 1982 and became a public company in 1985. In 1986 Conseco acquired Lincoln Income Life Insurance Company. Shearson Lehman Brothers advised Lincoln Income Life Insurance. Earlier, in mid-1985, Lincoln had agreed to be acquired by I.C.H. but the merger couldn't be consummated as the Kentucky Department of Insurance raised objections to certain expenses which Lincoln would have incurred in the merger. Lincoln also received a merger proposal from Redgate in 1985. Satisfied with its recipe for acquiring and improving insurance companies, Conseco stepped up its acquisition efforts in 1986. It purchased Bankers National Life Insurance Company for $118 million, respectively.

In 1998, Conseco purchased the former Greentree Financial, one of the largest financiers of mobile homes, in an attempt to diversify into consumer financial services. They also bought life insurance company Colonial Penn later that year, changing their name to Conseco Direct Life, though changing the name back to Colonial Penn in 2001 (known as Bankers Conseco Life Insurance Company in New York state). Conseco entered Chapter 11 reorganization in 2002 and emerged nine months later in 2003. Conseco's bankruptcy was the third-largest U.S. Chapter 11 filing at the time, after the bankruptcies of WorldCom Inc. and Enron In the process of reorganization, GreenTree was divested and thereafter Conseco solely focused on the insurance industry.