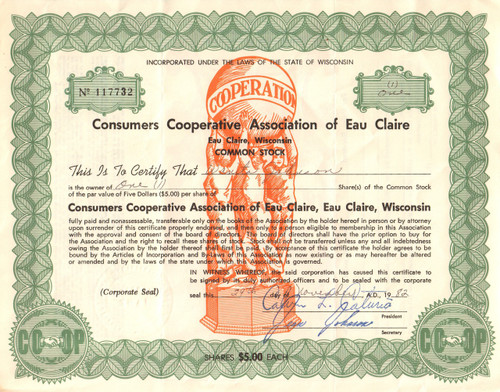 Stunning modern piece with a large under print of a monument like scene with figures supporting a globe with the word "Cooperation" emblazed.  Great CO-OP print in the border at the bottom left and right. Issued and not cancelled. Dated 1982.

Eau Claire Farmer-Labor Cooperative Association was founded in 1935 when 67 visionaries joined together to buy a train car load of coal to heat their Wisconsin homes. The next year the co-op changed its name to Consumers Cooperative Association (CCA) of Eau Claire and acquired a two-pump gasoline station on Wisconsin Street in downtown Eau Claire. A “super-station” was added in 1940 to provide motor service and lubrication. In 1946, an appliance department was added with one of the best appliance service departments in the area. A coal yard and a bulk petroleum plant were purchased in 1946 along with four trucks to deliver coal and petroleum.

In the 1980’s the Co-op exited the hardware, clothing, and furniture business and returned to its roots of selling groceries and petroleum. Today CCA provides its 80,000+ members with service, quality, and value at four grocery stores and 19 convenience stores in the Chippewa Valley and Barron Wisconsin. Rebranding has allowed the Co-op to retire the long-used grocery name of Mega Foods in 2014 while reemphasizing its roots with the updated name Mega! CO-OP. The Co-op’s vision is to be the retailer of choice in the markets it serves, operating with integrity and respect in everything it does while supporting the communities it serves.