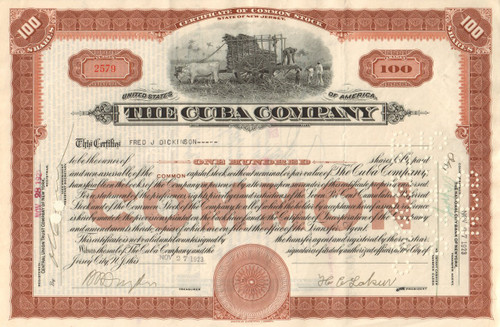 The Cuba Company was a business firm active in pre-Castro Cuba in railroad construction and operation, as well as in the ownership and operation of sugar and tobacco plantations.

The Cuba Company was incorporated in New Jersey 1900 with an $8,000,000 capitalization to develop Cuba through a railroad system. Sir William C. Van Horne, who resigned from the presidency of the Canadian Pacific Railway Company, was chosen as the president of the Cuba Company. He has spent considerable time in Cuba, in a thorough investigation of the resources and prospects of the Island, its people, and its railroads, and was instrumental in inducing the investment of American capital in this enterprise. His own railway experience was useful to the new company.

Besides the men already mentioned as subscribers the list includes: H. M. Flagler, the Standard Oil magnate; Edward H. Harriman of the syndicate now in charge of the affairs of the Union Pacific Rail- road; Thomas F. Ryan, P. A. B. Widener, and W. L. Elkins of the Whitney syndicate, E. J. Berwind, Gen. Grenville M. Dodge, I. Waiters, George G. Haven, H. M. Whitney, G. B. Hopkins, Winiarn Lanman Bull, and Charles P. Barney. Most of the subscribers were unacquainted with all but the general scheme of the company, simply made their investments relying on the strength of the men at its head.

There were some eight railroads in Cuba. Their roadbeds are defective, their coaches were primitive, and the mileage rate charged was remarkably high. The third-class coaches resembled American cattle cars. To go from one end of Cuba to the other it was necessary to use a vessel or travel on horseback. The entire province of Santiago, on the eastern end is practically destitute of railroad facilities, although it was the rich mining district of the island, and it was necessary to build 350 miles of road to connect the City of Santiago with the system which touches Havana.