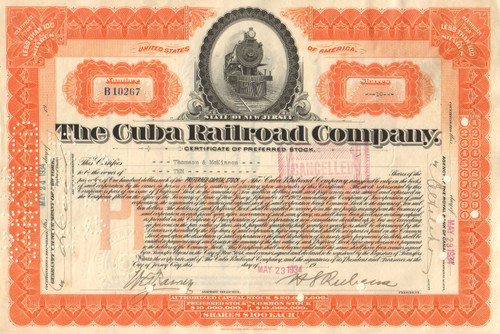 The Cuba Railroad Company was controlled by the Consolidated Railroads of Cuba (financed by US corporations) , but was nationalized in 1960 as a result of Castro taking over power. The Cuba Railroad Company connected to the United Railroads of Havana, reducing travel time between Camaguey and the capital from three days by steamship to just 15 hours by train. The railroad company by 1952 had merged with Northern of Cuba RR (founded in 1916), the Camaguey & Nuevitas RR (1837), the Espirituano RR, and the Guantanamo & Western RR (1882).

Cuba's railway history began on October 12, 1834 when the regent queen of Spain Maria Christina of the Two Sicilies approved the building of the first line. When the Compania de Caminos de Hierro de La Habana opened the 27.5 km line from Havana to Bejucal on November 19, 1837, it was the first steam railway line in Latin America. At this point Spain did not possess any railroad lines. The 27.5 km long line from Havana was extended by an additional 17 km to Guines on 19 November 1839. By December 1843 the cities San Felipe and Batabano were added to the rail network and further extensions were added in 1847 (17 km), 1848 (21 km), and 1849 (21 km).

From 1940 to 1959 Cuba's railway system was modernized by the acquisition of train stock from Budd and Fiat. These trains provided medium speed self-propelled (diesel) four-car trains service on the main line between Havana and Santiago de Cuba. Also after World War II a large network of diesel intercity buses was created with four or five major carriers competing in the east-west corridor between Havana and the provinces to the east.

After the revolution with the nationalization of the transportation system, the diversion of resources to defense expenditures and the lack of competition for the service, the train stock slowly deteriorated; this coupled with the inability to obtain replacement parts from the US that who had been the main supplier of the equipment for decades destroyed the once efficient system. A few sugar factories switched over to diesel electric locomotives to haul freight. By 1958, Cuba had more railway trackage per square mile than any other country.