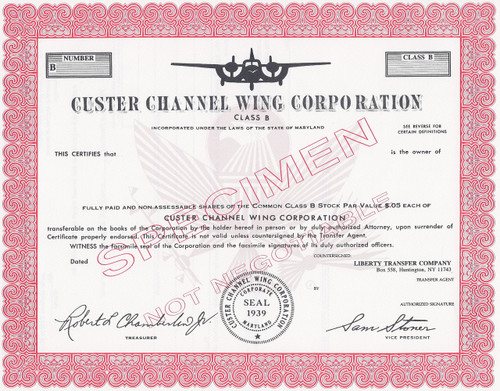 Great specimen cert (printer sample) with a silhouette of the company's unique aircraft design as the vignette. While the planes flew, the design never caught on and the aerodynamics were not as efficient as believed. Crisp and clean example.

The Custer Channel Wing was a series of American-built experimental aircraft designs of the 1940s and 1950s incorporating a half-barrel shaped section to each wing.

During the early 1950s, Custer formed the Custer Channel Wing Corporation to develop and build the five-seat CCW-5 design which was intended for commercial sale. The first example N6257C was designed by Custer but built by the Baumann Corporation of Santa Barbara, California. It utilised an adapted fuselage and tail assembly of a Baumann Brigadier. Power was from two pusher 225 h.p. Continental O-470 engines. The first flight was made on 13 July 1953.

Custer persisted with his design and built the second example N5855V at the Custer Channel Wing Corp factory. It again used a Baumann Brigadier fuselage and tail assembly. Although several firms expressed interest in production of the design, all failed to provide sufficient funds. This aircraft first flew on 19 June 1964.

The CCW-5 accommodated five persons, and its power plants are suspended in the centre of the 6 ft-chord wing channels on tubular frameworks attached to the wing spars. The aircraft draws air through