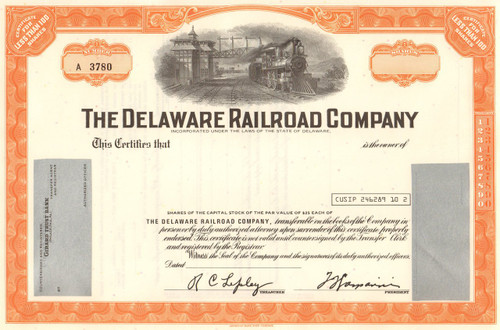 Nice collectible stock cert from this RR.  Great train vignette as it passes through a switch yard. Unissued and not cancelled. Circa 1960s per referenced issuance.

The Delaware Railroad is a corporation of the States of Delaware and Maryland, having its principal office at Dover, Del. Although the Delaware Railroad acquired title to its original property on January 23, 1899, it did not commence recording the results of the operation of its property in its books until February 1, 1899. The accounting data in this report, therefore, cover the period from February 1, 1899.

The property of this company was operated from January 23, 1899, the date it took over its original road for operation, to December 31, 1917, by the Philadelphia, Wilmington and Baltimore Railroad Company and it successors, the Philadelphia, Baltimore, and Washington Railroad Company and The Philadelphia, Baltimore and Washington Railroad Company, under lease agreements. On January 1, 1918, the lease of the latter company was assumed by the Pennsylvania and the common-carrier property of the Delaware Railroad was taken over for operation by the United States Railroad Administration as a part of the operating system of the Pennsylvania Railroad, and it is so operated on date of valuation.

The owned mileage of the Delaware Railroad, amounting to 245 miles, was acquired partly by consolidation and partly by purchase. The property acquired by purchase was bought from The Baltimore and Delaware Bay Railroad Company without acquiring the corporate rights and franchises of that company. Of the seven corporations that comprise the line of succession culminating in the Delaware Railroad as at present constituted, three corporations did not construct any road or other common-carrier property. These companies were the Queen Anne's and Kent Railroad Company, as reorganized, Delaware and Chesapeake Railway Company, and The Cambridge and Seaford Rail Road Company.