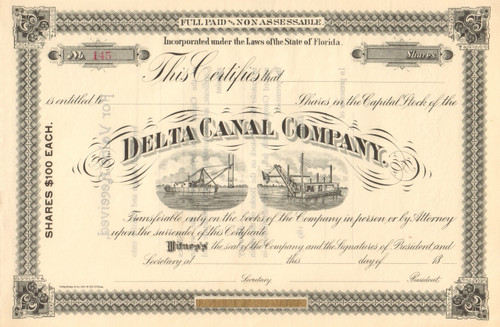 Nice canal stock cert with multiple vignettes of dredging vessels (one of which was named Alaska). Unissued and not cancelled.  Circa 1893 from company records.

The earliest Florida law on drainage of swamp and overflowed lands was enacted. The Delta Canal Company completed canals from Lakes Apopka, Dora, Eustis and Griffin into the Ocklawaha River.  This lowered the water surface of Lake Apopka by approximately 1 meter, exposing the sediment surface of most of the saw grass marsh on the north shore.  By 1910, due to crop failures because of difficulty in water table management and cold waves, the canal becomes filled with vegetation and lake stage returns, more or less, to its normal levels.

The Drainage by Counties Act of 1901 enabled landowners to petition counties to build ditches, dams and canals, issue bonds for construction, and tax for maintenance, enlargement and repair of works. In 1907, the Everglades Drainage District was created. Between 1907 and 1929, it spent $18 million and built 440 miles of canals and levees.