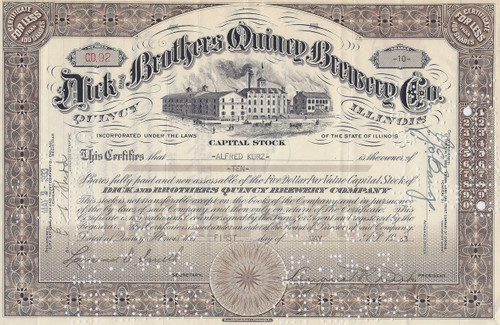 The Dick Brothers Brewery opened in 1857 by three brothers: John, Jacob, and Matthew. The three Dick brothers originally hailed from Ruppertsberg, Thein-Pfalz, Bavaria where their   father was a wine-maker. Having that background, the brothers moved to the United States in 1852 although they did not originally move to Quincy, Illinois. At first they lived in Belleville, moving to Quincy in 1856. The brothers were making their way to Iowa when they stopped in Quincy. Upon their arrival, they discovered a clear, cold, bubbling spring on the property of William Shanahan. With this knowledge in mind, the brothers purchased the land for $5,000 and set to work erecting their own brewery. They basically lived at the brewery until it was fully established and they could hire enough men to work.

When the “three brothers from Belleville” moved to Quincy Matthew was 37, John was 29, and Jacob was 22. Originally Matthew was a cooper, or barrel maker, John was a baker, and Jacob was a salesman for a hardware store. Despite their former professions, the brothers took on new responsibilities at the brewery. John took over the presidency of Dick Brothers although Jacob did much of the management. Jacob also served as the bookkeeper, taking on these responsibilities because his English skills were better than that of his brothers. The original parcel of land the Dick Brothers Brewery stood on was originally sold to them for $5,000 by William Shanahan but the brothers later expanded as their business grew.