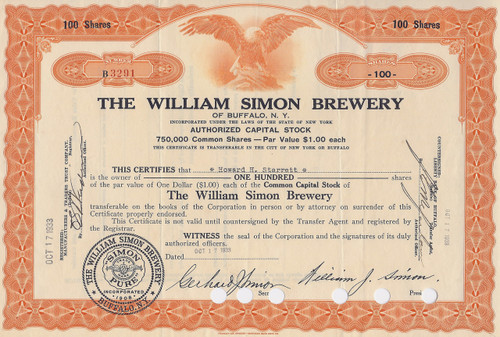 Nice eagle vignette printed in the same color of the certificate. Dates noted above.

Simon Pure was one of the oldest operating Buffalo breweries closing in 1971. Simon's, like many breweries, started under a different name. The William Simon Brewery was the successor to the John Schusler Brewery, founded in 1859 located in Buffalo, New York. William Simon purchased the brewery in 1896, after a period as Schusler's brewmaster.

It reopened after Prohibition and built a strong local following for its Simon Pure Beer and Old Abbey Ale. The William Simon Brewery managed to outlast many other the other breweries in Buffalo, finally closing in 1973. After the brewery closed, its brands were purchased and produced for a time by the Fred Koch Brewery of Dunkirk, New York, until it closed in about 1980.