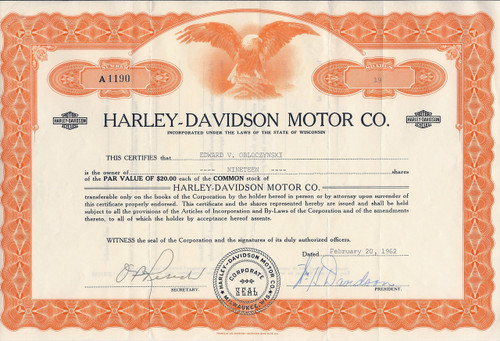 Amazing find -- a real Harley-Davidson stock certificate from the pre-AMF buyout era. Eagle vignette with the old Harley logo that includes the word "Cycles" instead of "Company" as found on the modern Harley stock certificates. Older company seal at the bottom. Very nice (blue ink) signature of William H Davidson as president.

WILLIAM H. DAVIDSON
As the son of William A. Davidson, one of the original founders of Harley-Davidson, William H. Davidson worked his way through the company ranks from shop worker to president of the company. Davidson was born on September 2, 1905. He learned to ride during the 1920s and rode his motorcycle to work nearly every day, even well into his 70s.

Davidson attended the University of Wisconsin, graduating with honors in business studies, and joined his family’s business in 1928. Instead of assuming a managerial position, Davidson started his career at the motor company by working on the shop floor. This proved to be valuable experience for Davidson, who took advantage and learned all he could about the manufacture of motorcycles. He steadily worked his way through the ranks of the company. He became a foreman, and then worked as manager in a variety of departments, before becoming president of Harley-Davidson in 1942.

Davidson led Harley-Davidson through World War II. The company produced thousands of motorcycles for the war effort. During the post-war era, Davidson labored to find ways for his company to keep pace with the growing demands for motorcycles at a time when raw materials were scarce.

Davidson brought in his son William G. Davidson (Willie G.) to head up the design department of the company. His son’s unique designs, which utilized many ideas used by customizers, helped revolutionize the image of Harley-Davidson.

Davidson headed Harley-Davidson at a time when competition from foreign competition began to put a strain on the company’s market share. He remained as president after the recreation company AMF purchased the company. Conflicts with AMF’s strategy and chaotic market conditions led to Davidson’s resignation in 1973.

Even though he was no longer actively involved with the company, Davidson lived to see the renewal and great success that Harley-Davidson enjoyed starting in the late-1980s. Davidson died in 1993.