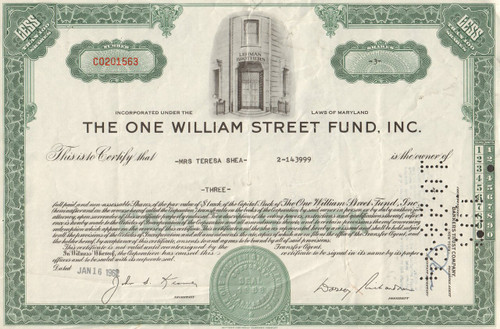 Historic vignette of the Lehman Brothers office front (on 1 William St).  Issued and cancelled in the early 1960s.  This is a rare opportunity to get a real stock certificate as a memento of the company.  This is a very hard to find piece!  Certificates have some wrinkles and folds from storage.

Lehman Brothers Holdings Inc. was a global financial services firm. Before declaring bankruptcy in 2008, Lehman was the fourth-largest investment bank in the US (behind Goldman Sachs, Morgan Stanley, and Merrill Lynch), doing business in investment banking, equity and fixed-income sales and trading, research, investment management, private equity, and private banking.

At 1:45am on September 15, 2008, the firm filed for Chapter 11 bankruptcy protection following the massive exodus of most of its clients, drastic losses in its stock, and devaluation of its assets by credit rating agencies. Lehman's bankruptcy filing is the largest in US history, and is thought to have played a major role in the unfolding of the late-2000s global financial crisis. The following day, Barclays announced its agreement to purchase, subject to regulatory approval, Lehman's North American investment-banking and trading divisions along with its New York headquarters building. On September 20, 2008, a revised version of that agreement was approved by U.S. Bankruptcy Judge James M. Peck. The next week, Nomura Holdings announced that it would acquire Lehman Brothers' franchise in the Asia-Pacific region, including Japan, Hong Kong and Australia, as well as Lehman Brother's investment banking and equities businesses in Europe and the Middle East. The deal became effective on October 13, 2008.[

Lehman Brothers Holdings Inc. founded in 1850, is a diversified, global financial services firm. It is a participant in investment banking, equity and fixed income sales, research and trading, investment management, private equity, and private banking. It is a primary dealer in the U.S. Treasury securities market. Its primary subsidiaries include: Lehman Brothers Inc., Neuberger Berman Inc., Aurora Loan Services, Inc., SIB Mortgage Corporation, Lehman Brothers Bank, FSB, and the Crossroads Group. The firm's worldwide headquarters are in New York City, with regional headquarters in London, and Tokyo and offices throughout the world.

In 1844, 23-year-old Henry Lehman, the son of a cattle merchant, emigrated to the United States from the town of Rimpar, in the German state of Bavaria. He settled in Montgomery, Alabama, where he opened a dry goods store, "H. Lehman". In 1847, following the arrival of Emanuel, the Firm became "H. Lehman and Bro." Finally, with the arrival of their youngest brother, Mayer, in 1850, the Firm changed its name again and "Lehman Brothers" was founded.

In the 1850s Southern United States, cotton was one of the most important crops (if not the most important crop) in the country, the era recalled by the phrase "cotton was king." Capitalizing on cotton's high market value, the three brothers began to routinely accept raw cotton from customers as payment for merchandise. As a natural outgrowth of this business, the brothers began a successful second business, trading in cotton. Within a few years this business grew to become the most significant part of their operation

Lehman Brothers became members of the Coffee Exchange as early as 1883 and finally the New York Stock Exchange in 1887. The firm also began to develop international interests in Europe and Japan, as well as expertise in merchant banking. In 1899 they underwrote their first public offering, the preferred and common stock of the International Steam Pump Company.

Despite the 1899 offering of International Steam, the Firm's real shift from being a commodities house to a house of issue did not begin until 1906. The Firm was among the first to recognize the potential of issuing stock as a way for companies to raise capital, in contrast to the issuance of debt, which had historically been the method. In that year, under Philip Lehman, the Firm partnered with Goldman, Sachs & Co., to bring the General Cigar Co. to market, followed closely by Sears, Roebuck and Company. During the following two decades, almost one hundred new issues were underwritten by Lehman Brothers, many times in conjunction with Goldman, Sachs. Among these were F.W. Woolworth Company, May Department Stores Company, Gimbel Brothers, Inc., R.H. Macy & Company, The Sudebaker Corporation, The B.F. Goodrich Co. and Endicott Johnson Corporation

The company weathered the capital crisis of the Great Depression by focusing on helping private funders and companies connect, while the equities market recovered. This was the foundation of today's venture capital industry. By 1928, the Firm had outgrown its premises in the Farmers Loan & Trust Building and moved to its now famous One William Street location In 1929, the Firm created the Lehman Corporation, an investment company, wholly separate from Lehman Brothers, but with many common officers and directors. Years later, the Firm would characterize its first foray into asset management, via the Lehman Corporation, as "the most important single chapter in its history".

Hostilities between the Firm's investment bankers and traders (who were driving most of the Firm's profits) was becoming palpable. In 1983, Peterson promoted Lewis Glucksman, the President, COO, to be his co-CEO. Glucksman introduced changes in personnel, and in the determination of bonuses and partnership interests. These measures had the effect of increasing tensions, which when coupled with Glucksman’s management style and a downturn in the markets, created a bitter struggle for power in which Glucksman prevailed and Peterson was ousted, leaving Glucksman as the sole CEO.

Upset bankers, who had soured over the power struggle, left the company. Steve Schwarzman, chairman of the firm's M&A committee, recalled in a February 2003 interview with Private Equity International that "Lehman Brothers had an extremely competitive internal environment, which ultimately became dysfunctional." The company suffered under the disintegration, and Glucksman was pressured into selling the Firm to Shearson, an American Express backed electronic transaction company, in 1984, for $360 million. On May 11, the combined firms became Shearson Lehman/American Express. In 1988, Shearson Lehman/American Express and E.F. Hutton & Co. merged as Shearson Lehman Hutton Inc.

In late August 2007, Lehman Brothers closed its subprime lender, BNC Mortgage. The New York investment bank cut 1,200 positions in 23 locations as a result of the closing of BNC Mortgage. It took an after-tax charge of $25 million and a goodwill writedown of $27 million. Lehman said that poor market conditions in the mortgage space "necessitated a substantial reduction in its resources and capacity in the subprime space". Lehman said it continues to originate mortgages through Aurora's platform. Aurora Loan Services of Littleton, Colo., specializes in Alt-A mortgages.