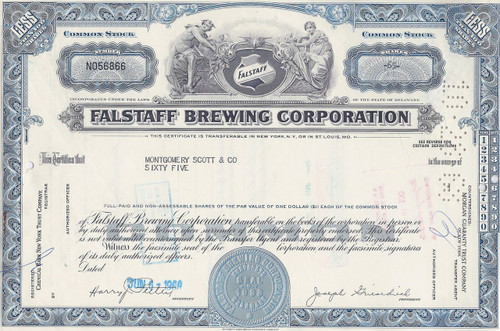 Fortunes declined throughout the 1970s as consolidation swept the beer industry, and the company was bought in April 1975 by the S&P Company, owned by Paul Kalmanovitz. In the interim, Chicago Cubs announcer Harry Caray endorsed the brew in live TV commercials, many times with a glass of beer in his hand and sipping it. Kalmanovitz also owns General Brewing, Pabst, Pearl, Olympia, and Stroh's. That year, the company ranked 11th in sales nationally, and the original St. Louis plant was closed. Subsequent closures included New Orleans in 1979, Cranston and Galveston in 1981, and Omaha in 1987. After the 1990 closing of the last Falstaff brewery in Fort Wayne, the brand name became a licensed property of Pabst, which continued to produce Falstaff Beer through other breweries. Having sold only 1468 barrels of the brand during 2004, Pabst discontinued production of the Falstaff label in May 2005.