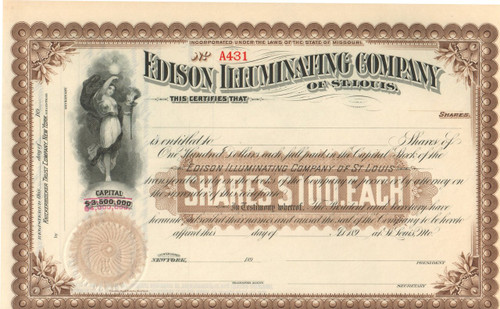 Great historic piece with a vignette of a classical female figure holding a torch under an Edison light bulb.  Unissued and not cancelled. Printed date of 189_.

The Edison Illuminating Company was established by Thomas Edison on December 17, 1880, to construct electrical generating stations, initially in New York City. The company was the prototype for other local illuminating companies that were established in the United States during the 1880s:

July 4, 1883, Sunbury, Pennsylvania
The opening of the central station for the first three-wire (DC) Edison incandescent electric light (village system), which was attended by Edison himself.

October 1, 1883, Brockton, Massachusetts
A three-wire plant capable of supplying about 1600 lamps. Now listed on the National Register of Historic Places.

November 17, 1883, Mount Carmel, Pennsylvania
The Edison Electric Illuminating Company of Mount Carmel was founded. This was the first isolated electrical plant in the world. Mt. Carmel was the first town lighted exclusively by electricity; 38 arc lamps and 50 incandescent light bulbs were erected in the downtown business district. It was also the fifth electrical plant constructed upon the Edison system.

In 1891, Henry Ford became an engineer with the Edison Illuminating Company, and was promoted to Chief Engineer in 1893.

The Edison Illuminating Company was purchased by Consolidated Gas sometime between 1898 and 1901. In 1936, with electricity sales far outpacing gas sales, the company changed name to Consolidated Edison.