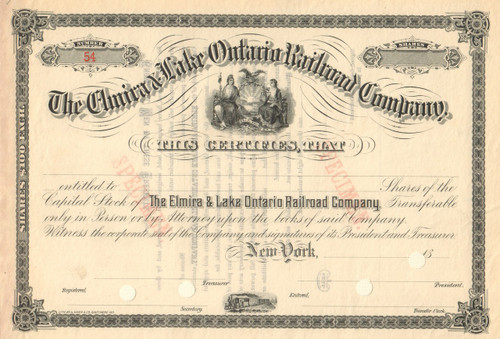 The Chemung RR, Elmira, Jefferson & Canandaigua RR, and Sodus Bay & Southern Ry. were consolidated on December 31, 1886 to form the Elmira and Lake Ontario Railroad Company, a continuous line from the Erie interchange at Horseheads to Sodus Point, with a branch from Stanley to Canandaigua. It was leased by the Northern Central, which reached it via the Elmira and Williamsport Railroad, another subsidiary, and track rights over the Erie from Elmira to Horseheads. The lease was transferred to the PRR, which controlled the Northern Central, on January 1, 1911.

A short line from Canandaigua to a pier on Canandaigua Lake was built by the Canandaigua Lake Railroad Company, incorporated July 21, 1887, which was merged into the Elmira & Lake Ontario on December 27, 1888. The principal purpose of the railroad was to serve as an outlet for coal shipments from the mines tapped by the Northern Central, using the coal pier at Sodus Bay to ship to markets on the Great Lakes.