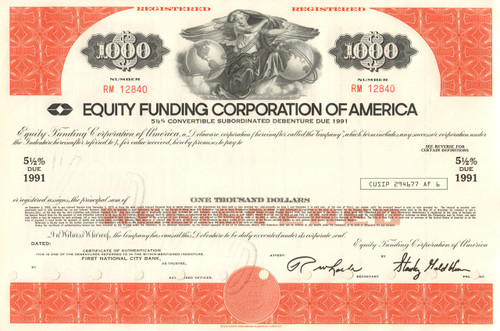 This is an authentic stock-sized bond certificate from the Equity Funding Corporation of America.  The bond certificate has a fantastic vignette of an allegorical winged female flanked by the two hemispheres of the earth.  The president, Stanley Goldblum (facsimile signature on this bond!), and others were convicted by the SEC.

Equity Funding Corporation of America was a Los Angeles-based U.S. financial conglomerate that marketed a package of mutual funds and life insurance to private individuals in the 1960s and 70s. It collapsed in scandal in 1973 after ex-employee Ronald Secrist and securities analyst Ray Dirks blew the whistle on massive accounting fraud, including a computer system dedicated exclusively to creating and maintaining fictitious insurance policies. Investigation found that from 1964 onward, as many as 100 company employees had engaged in organized deception of investors, auditors, reinsurers and regulatory authorities.

An important sidelight was the filing of insider trading charges against whistleblower Dirks. The ensuing case of Raymond L. Dirks v. Securities and Exchange Commission went all the way to the U.S. Supreme Court where Dirks was finally acquitted. The case has been termed historic in helping to define insider trading, as well as the treatment of whistleblowers, analysts and the press.

The Billion Dollar Bubble is a 1976 film made for the BBC series Horizon and directed by Brian Gibson about the story of the two billion dollar insurance embezzlement scheme involving Equity Funding Corporation of America. The movie stars James Woods in the role of the actuary.

Unusual ID mining stock with a great left vignette of a seated classical female figure with the American shield in one hand and a wreath in the other.  Unissued and not cancelled. Printed date of 190_.

The fraud at Equity Funding Corp. of America ranks as a landmark event in the history of cooking the books. In 1972, the seller of mutual funds and insurance was a Wall Street wonder, ranked by Fortune as the fastest-growing financial conglomerate in America. A year later, the company had virtually collapsed amid the revelation that earnings were completely fabricated, the soundness of its business a sham.  First, there was the longevity. Fraud at the company lasted nine years, from 1964 to 1973.

How did executives and underlings at Equity Funding achieve this under the noses of auditors, analysts and investors? After all, this was no mere bulletin board stock flying under the radar of scrutiny; it was a NYSE-listed company with assets -- in theory, at least -- of more than $700 million.  It started with a good gimmick. Since 1960, the company had been selling an innovative financial product, one that was perfectly legitimate at the start. Called the "Equity Funding Program," it was a package of insurance and a mutual-fund investment. Under the program, customers would sign up to buy fund shares every year, then borrow against them to pay annual premiums on a life insurance policy.

A captivating idea, except it didn't make enough money. So some executives -- led by the president, chief financial officer and head of insurance operations -- got a little more creative with the numbers on their books.  The company apparently started in 1964 by overstating the commissions earned on sales of the Equity Funding program. Then came borrowing money without recording the liability on its books, or disguising it through complicated transactions with subsidiaries.

As the fraud progressed, more and more employees got recruited to help, and people started to get really creative. The problem with phony policies was that the company's auditors would randomly select some every now and then and ask to see the real-world files behind them. There were no files, of course, since there was no insurance. So to prop up the scam, conspirators threw late-night "fraud parties" to create phony files. When that solution proved inadequate, conspirators set up a secret office devoted exclusively to fabricating medical records and application forms on demand, known as the Maple Drive Gang.

The conspirators had a real eye for talent as well. In 1972, management discovered that four employees, quite separate from the fraud that the company was perpetrating, had teamed up to embezzle funds for themselves, mostly by filing phony death claims. When discovered, the quartet wasn't fired -- instead, three were rewarded with stock bonuses and all of them got a new assignment: supervising phony death claims on behalf of the "official" conspiracy.

In a 1971 press release trumpeting all the insurance that the company had supposedly written, Equity Funding quoted President Stanley Goldblum saying, "Quite obviously, this kind of production can only be generated by a professional, thoroughly dedicated group of people." In hindsight, that statement drips with irony. Goldblum, along with 18 of the other 21 indicted conspirators, pleaded guilty to taking part in the fraud. (The remaining three were convicted in a 1975 trial.)