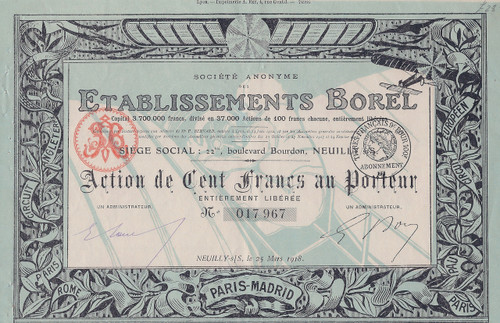 Etablissements Borel was a French aircraft manufacturer of the early twentieth century. It was founded by Gabriel Borel (1880-1960) and manufactured a number of monoplane designs between 1909 and 1914. The factory, located at Mourmelon was temporarily forced to close when the outbreak of World War I saw most of its workers conscripted into the army, but Borel re-opened in November 1915 to produce military aircraft for France under licence from other manufacturers including Caudron, Nieuport and SPAD.

After the war, Borel was restructured as the Société Générale des Constructions Industrielles et Mécaniques (SGCIM) and attempted to re-market one of its torpedo bomber designs as a civil transport. However, neither this nor two new-generation fighter designs were able to keep the company in business.

The Borel hydro-monoplane, which was developed from the 1911 Morane-Borel monoplane, was a tractor monoplane powered by a 80 hp Gnome Lambda rotary engine. The rectangular section fuselage tapered to a vertical knife-edge at the rear: at the front the longerons on each side were curved inwards, meeting at the front engine bearer. A curved aluminum cowling covered the top of the engine, and the sides of the fuselage were covered with aluminum as far aft as the rear of the cockpit. The two seats were arranged in tandem, with the pilot sitting in front. Dual controls were fitted. Tail surfaces consisted of a narrow-chord fixed horizontal surface with a much broader elevator with horn balances hinged to the trailing edge and a balanced rudder which extended below the sternpost and carried a small float. The main undercarriage consisted of a pair of unstepped flat-bottomed floats. Lateral control was by wing warping.

The 1911 Morane-Borel monoplane (sometimes referred to as the Morane-Saulnier Type A or simply the Morane monoplane) was an early French single-engine, single-seat aircraft. It was flown in several European air races. The Monoplane was a mid-wing tractor configuration monoplane powered by a 50 hp Gnome Omega 7 cylinder rotary engine driving a two-bladed Chauvière Intégrale propeller. The fuselage was a rectangular section wire-braced box girder, with the forward part covered in plywood and the rear part fabric covered: the rear section was left uncovered in some examples. The two-spar wings had elliptical ends and were braced by a pyramidal cabane in front of the pilot and an inverted V strut underneath the fuselage behind the undercarriage. Lateral control was effected by wing warping and the empennage consisted of a fixed horizontal stabiliser with tip-mounted full-chord elevators at either end and an aerodynamically balanced rudder, with no fixed vertical surface. In later examples the horizontal surfaces were modified, and consisted of a fixed surfacee with balanced elevators hinged to the trailing edge. The undercarriage consisted of a pair of short skids each carried on a pair of struts and a pair of wheels on a cross axle bound to the skids by bungee cords and a tailskid.

he Monoplane achieved fame when Jules Védrines flew one to victory in the 1911 Paris to Madrid air race, the only competitor to finish the four-day course. Later in the year he came second in the Circuit of Britain, flying an aircraft powered by a 70 hp Gnome. Another was flown by André Frey in the Paris-Rome race in 1911, finishing third. Emile Taddéoli was another owner of a Morane monoplane.