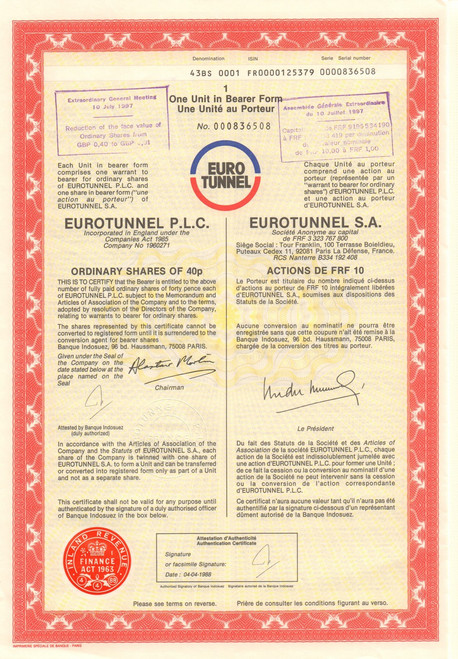 Rare and desirable modern piece from the company that built the successful English Channel Tunnel (the Chunnel).  The piece is a duel company piece (English and French) for Eurotunnel PLC and Eurotunnel SA.  Dated 1988 with coupons 6-18 still attached.

Groupe Eurotunnel SE manages and operates the Channel Tunnel between Britain and France including the vehicle shuttle services, and earns revenue on other trains (DB Schenker freight and Eurostar passenger) through the tunnel. It is listed on both the London Stock Exchange and Euronext Paris. The company is based in Paris.

The company was formed on 13 August 1986 with the objective of financing, building and operating a tunnel between Great Britain and France.

The company awarded a contract for the construction of the tunnel to TransManche Link (TML). The tunnel cost around £9.5bn to build, about double TML's original estimate of £4.7bn. The tunnel was financed partly from investment by shareholders and partly from £8bn of debt, and was officially opened on 6 May 1994 by HM Queen Elizabeth II and President François Mitterrand. In its first year of operation the company lost £925m because of disappointing revenue from passengers and freight, together with heavy interest charges on its £8bn of debt.

In April 2004, a dissident shareholder group led by Nicolas Miguet succeeded in taking control of the board. However, in February 2005 Jean-Louis Raymond, the Chief Executive appointed after the boardroom coup, resigned and Jacques Gounon took complete control becoming Chairman and Chief Executive. In July 2006, shareholders voted on a deal which would have seen half the debt, by then reduced to £6.2bn, exchanged for 87% of the equity. However this plan failed and on 2 August 2006 the company was placed into bankruptcy protection by a French court for six months.

In May 2007 a new restructuring plan was approved by shareholders whereby Deutsche Bank, Goldman Sachs and Citigroup agreed to provide £2.8bn of long-term funding, the balance of the debt being exchanged for equity, and the shareholders agreed to waive the unlimited free travel and other perks that they had enjoyed. In June 2007 the company entered into a partnership through subsidiary Europorte 2 with the Port of Dunkirk relating to rail freight traffic; the company was to operate trains from Dunkerque to the Delta 3 logistics terminal at Dourges, and collaborate on container shipments to the UK using the port of Dunkerque via the tunnel.

Following the restructuring, Eurotunnel was able to announce a small net profit in 2007, of €1 million, for the first time in its existence. Half-year earnings for 2008 rose to €26 million. The net profit for 2008 was €40 million, despite the costs associated with traffic loss from September 2008 to February 2009 following a fire in the tunnel, and this allowed Eurotunnel to issue its first-ever dividend, of €0.04 per euro value.

The return to financial health allowed the company to announce on 28 October 2009 the anticipated voluntary redemption of some of its convertible debt. By anticipating to November 2009 the reimbursement of debt due in July 2010, it aimed to issue up to 119.4 million new ordinary shares and thus shore up its capital while reducing its debt load.  In late 2009 the company and SNCF acquired Veolia Cargo splitting the business between them. The company took over French operations: Veolia Cargo France, Veolia Cargo Link and CFTA Cargo are expected to be rebranded Europorte France, Europorte Link and Europorte proximity and become part of its Europorte freight business. Socorail has not been announced as being rebranded.

In January 2010 the Port of Dunkerque awarded the company a seven-year concession to operate its 200 km (124 miles) railway system. In June 2010 the company acquired British rail freight company FirstGBRf for £31 million, to be merged into its Europorte. On 11 June 2012 a bid by the company for three Channel ferries belonging to the former operator SeaFrance (in liquidation) for lease to another operator was accepted. On the 11 June 2012 Eurotunnel acquired the assets of SeaFrance ferries Berlioz, Rodin and Nord Pas-de-Calais. They were chartered to start the MyFerryLink ferry company on 20 August 2012, owned by Eurotunnel.