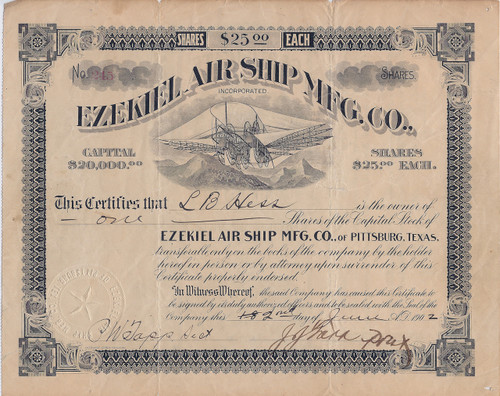 This stunning piece has a picture of the namesake aircraft flying in front of a mountain scene. Dated 2 June 1902, this is a significant piece of financial history!  Incredible historic piece - no other like it! Some light splits at the folds, at the top and bottom, that do not continue into the main body of the certificate.  A rare find for the most discerning of collectors.  This will be the centerpiece of an aviation or scripophily collection.  This is the only one that we have ever run across!

In December of 2003, America marked the centennial of the Wright brothers' airplane success at Kitty Hawk, North Carolina -- an achievement regarded as the beginning of powered flight.  But if a Baptist preacher from Pittsburg in Camp County had been blessed with a better press agent, the centennial might have been observed in East Texas a year earlier.

In late 1902, at least a year before the Wright brothers soared into the sky, an airplane designed by Rev. Burrell Cannon was flown 160 feet at Pittsburg. But the event went largely unpublicized and it wasn't until 1976 that a state historical marker finally recognized Cannon¹s accomplishment.  A saw miller and inventor, Cannon got his idea for the airship from the Old Testament book of Ezekiel, which described a flying machine: "The appearance of the wheels and their work was like unto the color of beryl and...their appearance and their work was as it were a wheel in the middle of a wheel."

Cannon designed his airship after studying the Biblical passage for years, making extensive mechanical notes, and finally producing a design around 1900. His plans featured a series of wheels, a 26-foot wingspan, and a cluster of levers which would control the plane's flight. The design looked more like a crude helicopter than a conventional airplane. Cannon then convinced ten friends to invest $20,000 in his Ezekiel Airship Manufacturing Company at $25 per share.

Built at P.W. Thorsell's foundry in Pittsburg, the plane was flown in 1902 by Gus Stamps, a foundry employee who worked on the contraption. Stamps and his fellow workers rolled the plane into a pasture and decided to try it out. It flew upward about ten feet and began to drift toward a fence before Stamps killed the power to the four-cylinder gas engine.  Cannon, ironically, wasn't present. He was preaching at a nearby church. When Cannon failed to arouse additional interest in his plane at Pittsburg, he loaded it onto a railroad flatcar and started to St. Louis, where the craft was to be exhibited. But a storm blew it from the flatbed railcar near Texarkana, destroying the machine.

Cannon built a second airship around 1911 -- some eight years after the Wrights' flight -- but it was also destroyed when a hired pilot flew it into the top of a telephone pole during a test flight. The incident caused Cannon to give up on his flying machine.  From 1914 to 1921, Cannon made his home in Longview and at the time of his death in 1923, he lived in Marshall. Although he was 74, he was in the midst of perfecting an automated cotton picker and boll weevil destroyer. In 1922, a fire destroyed all of his plans for the Ezekiel Airship.

But Pittsburg, which apparently didn¹t think much of the old preacher's invention in the early 1900s, has since embraced the history of the Ezekiel Airship.  In a downtown museum, visitors will find a full-sized replica of the plane and a tribute to its inventor.