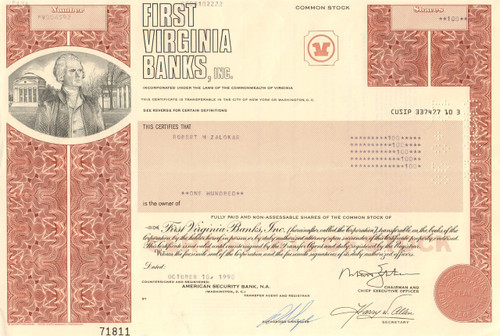 Nice collectible stock with a great vignette of Thomas Jefferson on the Lawn of UVA with the Rotunda in the background. Issued and cancelled. Dated 1980's and 1990's.

First Virginia Banks, Inc. was a registered bank holding company headquartered in Virginia, with 23 separately-chartered member banks throughout Virginia, Maryland, and Tennessee. In addition to over 350 branch banking offices, the holding company has insurance, advertising, and mortgage subsidiaries with operations in seven states. The regional institution's stronghold lies in the affluent and stable metropolitan corridor extending from Baltimore to Washington, D.C. and south to Norfolk. This territory, with its concentration of government agencies and the highest average household income level of any major metropolitan area in the United States, has been characterized as "the most recession-resistant area in the country."  The company was acquired by BB&T in 2003..

The company's history may be traced to Edwin T. Holland, who, in 1944, became the director and shareholder of Old Dominion Bank, a small Arlington, Virginia, institution with three branches in the greater Washington, D.C. area. Holland was instrumental in transforming Old Dominion from a strictly commercial, industrial bank into a retail, consumer-oriented institution. He accomplished the shift by extending bank hours for the convenience of working customers, offering premiums with new accounts, and utilizing aggressive advertising campaigns including direct mail.

After World War II, as automobile sales increased dramatically, Holland created the Mt. Vernon Insurance Agency to insure bank customers' car loans in 1949. Banking regulations prohibited Old Dominion from providing the capital for founding the insurance venture, so Holland incorporated Mt. Vernon himself and "donated" all its stock to the bank. The insurance company was then used as a vehicle for growth in the restrictive, but stable and prosperous, U.S. banking environment of the post-war era. Mt. Vernon acquired controlling interests in the Bank of Annandale and National Bank of Manassas in the early 1950s. When Congress passed the Bank Holding Act mid-decade, Mt. Vernon was reorganized as First Virginia Corporation, a bank holding company that was authorized to purchase and operate other banks within the state.

By 1960, First Virginia had four banks with eight branch offices and $68 million in assets. The continuing relaxation of state and federal banking regulations encouraged an unprecedented surge of bank mergers. First Virginia's financial holdings grew eight-fold over the course of that decade, as it added eight banks in the state's largest metropolitan areas.

Barriers to intra- and then interstate banking continued to dissolve in the ensuing decades, encouraging industry consolidation that would continue through the 1990s. While First Virginia took advantage of opportunities for growth through acquisition, it did not expand at the breakneck pace of some of its competitors. First Virginia continued its careful acquisition and merger strategy in the 1970s, trading its own shares for ownership of ten independent banks and establishing five others. Consolidation culminated in a roster of 21 banks with 168 offices in 1980. By that time, First Virginia had access to over two-thirds of the state's population and had accumulated over $1 billion in assets. The pace of acquisition intensified in the 1980s, as the bank holding company brought 20 more banks into the fold and expanded into Maryland and Tennessee. In 1986, First Virginia ventured north, acquiring The Commercial Bank in Bel Air, Maryland. The company's first Tennessee acquisition came just one year later, with the purchase of Tri-City Bancorp, Inc. through an exchange of stock.

While First Virginia professed no grand growth aspirations, it did expect to acquire more banks in central and southern Maryland and east Tennessee before the end of the twentieth century. Criteria for acquisition included clean loan portfolios and a compatible corporate culture. In 1993, First Virginia recorded its 17th consecutive year of dividend increases, and its capital ratio (a key banking indicator) ranked first in the top five percent of the United States' largest banking companies. Moreover, as rising interest rates, intensifying competition from several angles, and regulatory challenges converged in the last decade of the twentieth century, the institution's top executives hinted in 1993's annual report that they may be inclined to take some risks in the years to come but will continue to adhere to its primary goal of operating a safe and sound banking institution while providing a good return to shareholders.