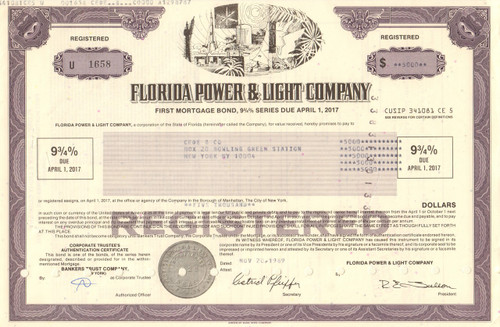 American Power and Light, a utility holding company, purchased electricity firms around Florida from March 1924 until December 1925 and tied them together as Florida Power and Light (FPL). The company was incorporated in December 1925. In January 1926, FPL replaced the Miami Beach Electric company. A 1926 hurricane caused damage to power lines through Miami, and FPL, through its parent company, repaired the damage and built two new generating plants. In 1950, American Power and Light made FPL an independent public corporation that was listed on the New York Stock Exchange in response to a Congressional act which limited utility holding companies.

In 1984, the holding company FPL Group Inc. was formed.FPL was the first non-Japanese company to win the Deming Prize for quality from the Union of Japanese Scientists and Engineers in 1989. In 1990, FPL purchased Georgia Power Company's plant near Atlanta. Houston-based Gexa Energy was acquired by FPL in June 2005 for $80.6 million. After the 2005 storm season which included hurricanes Katrina, Rita, and Wilma, FPL invested more than $2 billion in improvements to the electric grid against severe weather.

In March 2010, FPL Group Inc. changed its name to NextEra Energy Inc. to "modernize" the company's image. The stock ticker changed from FPL to NEE.