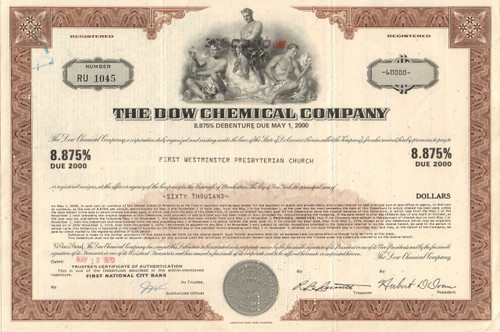 Very nice stock-sized bond with a nice vignette of three classical male figures.  Issued and cancelled.  Dated in the 1970's.

Dow manufactures plastics, chemicals, and agricultural products. With a presence in about 160 countries, it employs about 54,000 people worldwide. The company has seven different major operating segments, with a wide variety of products made by each one. Dow's 2012 sales totaled approximately $57 billion. Dow has been called the "chemical companies' chemical company" in that most of its sales are to other industries rather than end-users. Dow sells directly to end-users primarily in the human and animal health and consumer products markets. Dow is a member of the American Chemistry Council.

Dow was founded in 1897 by Canadian-born chemist Herbert Henry Dow, who invented a new method of extracting the bromine that was trapped underground in brine at Midland, Michigan. Dow originally sold only bleach and potassium bromide. Early in the company's history, a group of British manufacturers tried to drive Dow out of the bleach business by cutting prices. Dow survived by also cutting its prices and, although losing about $90,000 in income, began to diversify its product line. In 1905, German bromide producers began dumping bromides at low cost in the U.S. in an effort to prevent Dow from expanding its sales of bromides in Europe. Instead of competing head on with the German producers, Dow bought the cheap German-made bromides and shipped them back to Europe, undercutting his German competitors.

During World War I, Dow Chemical supplied many war materials the United States had previously imported from Germany. By 1918, 90 percent of Dow Chemical production was geared towards the war effort. At this time, Dow created the diamond logo that is still used by the company. After the war, Dow continued research in magnesium, and developed refined automobile pistons that produced more speed and better fuel efficiency.

In the 1930s, Dow began producing plastic resins, which would grow to become one of the corporation's major businesses. Its first plastic products were ethylcellulose, made in 1935, and polystyrene, made in 1937. From 1940 to 1941, Dow built its first plant at Freeport, Texas, in order to produce magnesium extracted from seawater rather than underground brine. The Freeport plant is now home to Dow's largest site - and one of the largest integrated chemical manufacturing sites in the world. The site grew quickly - with power, chlorine, caustic soda and ethylene also soon in production. Growth of this business made Dow a strategically important business during World War II, as magnesium became important in fabricating lightweight parts for aircraft.

The United States military dropped napalm bombs on North Vietnam during the Vietnam War. Dow was one of several manufacturers who began producing the napalm B compound under government contract from 1965. After experiencing protests and negative publicity, the other suppliers discontinued manufacturing the product, leaving Dow as the sole provider. The company said that it carefully considered its position, and decided, as a matter of principle, "its first obligation was to the government". Despite a boycott of its products by anti-war groups and harassment of recruiters on some college campuses, Dow continued to manufacture napalm B until 1969. Agent Orange, a chemical defoliant containing dioxin, was also manufactured by Dow in New Plymouth, New Zealand, and in the United States for use by the British military during the Malayan Emergency and the U.S. military during the Vietnam War. In 2005, a lawsuit was filed by Vietnamese victims of Agent Orange against Dow and Monsanto Co., which also supplied Agent Orange to the military. The lawsuit was dismissed.