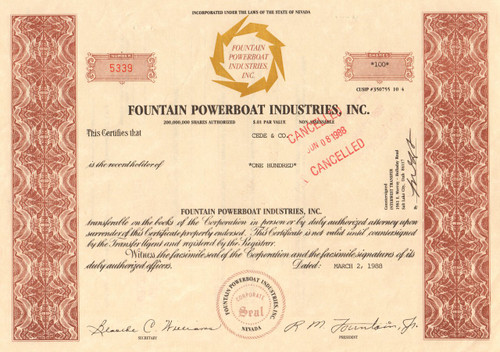 Fountain Powerboat Industries Inc. operates through its wholly owned subsidiary, Fountain Powerboats Inc., as a designer, manufacturer, and seller offshore sport boats, sport fishing boats and sport cruisers intended for the recreational power boat market where speed, performance and quality are the main criteria for purchase. The Company also produces military support craft for domestic and international government agencies, including the United States Customs Service, the United States Navy and the United States Coast Guard. The majority of Fountain's recreational products are based on a deep V-shaped fiberglass hull with a V-shaped pad, a notched transom and a positive lift step hull.

Fountain Powerboats is located in Washington, North Carolina on the Pamlico River with  a modern marina and a state-of-the-art, technologically advanced, boat manufacturing facility. FPWR uses the Pamlico River and Atlantic Ocean to test and tune every boat that they build.  Reggie Fountain launched Fountain Powerboats in 1978 with the single-minded goal of building the fastest, safest, smoothest and best handling boats on the water.

With Doub’s approval Wednesday, Liberty became the majority owner of Fountain Powerboats. Reggie Fountain was retained as the company’s president and CEO, and Bill Gates was named chairman. According to Gates, Liberty Investments, which is based in Florida, also is majority owner of Donzi and Pro-Line Boats. Fountain called the investment group “avid boat-lovers.”