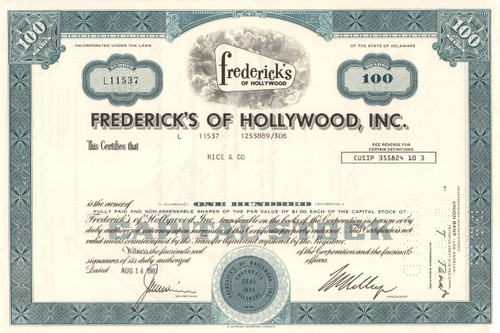 Very fun collectible stock.  Great vignette of the company's logo set against clouds.  Issued and cancelled. Dated 1980's. Note - the blue version is without marks and a clean vignette. The orange and green certificates are marked as shown and offered at a discount price.

The business was started by Frederick Mellinger (inventor of the push-up bra) in 1947. Until the 1980s, the market leader was Frederick's of Hollywood which was then overtaken by Victoria's Secret.

In 1992, Frederick's lingerie museum drew national media attention when it was looted during the Los Angeles riots. One repentant looter delivered a bag of pilfered celebrity lingerie, including Ava Gardner's and a push-up bra once worn by TV actress Katey Sagal, to the pastor at nearby Blessed Sacrament Catholic Church, Hollywood. An Austin newspaper noted that Blessed Sacrament's pastor "may be the only priest in America to ever comfort a man who felt guilty about stealing celebrity bloomers." Some of the lingerie worn by the 1950s pin-up and bondage model Bettie Page was from Frederick's of Hollywood.

The company filed for Chapter 11 bankruptcy in 2001. In 2003, it emerged from bankruptcy and was headquartered in Los Angeles. In 2006, it merged with New York City sleepwear manufacturer Movie Star and the headquarters was moved to New York. In 2008, the company changed its name to Frederick's of Hollywood Group Inc.  The company was traded on the American Stock Exchange under the ticker symbol FOHL, but in May 2014, the company was taken private by Harbinger Group and other investors. Its headquarters remain in New York City.

In 2015, the company closed its stores and again filed for Chapter 11 bankruptcy. Its brand and online operations were acquired by Authentic Brands Group.