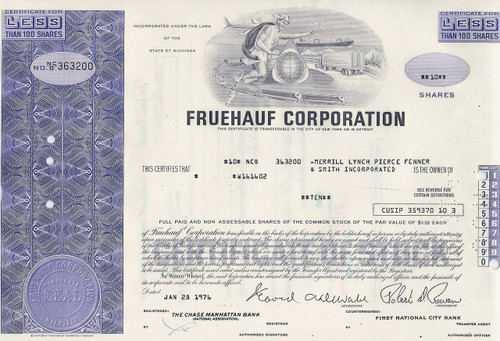 Very eleaborate vignette on this popular piece.  A winged Mercury is highlighted in front of aviation, shipping, railroad, and trucking. Available in your choice of two colors.

It was founded in 1918 in Detroit, Michigan, after August Fruehauf created the semi-trailer and launched a new industry. The Fruehauf trailer company introduced revolutionary inventions to trucking and transportation with hydraulic dump trailers, bulk tanker trailers, and automatic fifth wheel coupling among their over one thousand patents, including the shipping container in 1956.

Expanding across the country, Fruehauf had 16 plants and over 80 distributorships for parts and service. Globally, the company expanded into Europe, South America and Asia. Following a proxy battle in the late 1980s the company filed for bankrupt protection in 1997. International divisions became independent, U.S. subsidiaries like Kelsey Hayes, Pro-Par, Budd Wheels and Hobbs were sold; Wabash National acquired the crippled company in 1997.