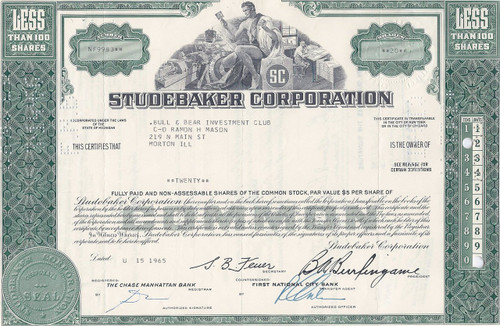 Elaborate vignette of a man holding a piston sitting on the SC logo. Background includes machine shop and an engineer at his drafting desk. A very popular and affordable certificate.

Studebaker Corporation was a United States wagon and automobile manufacturer based in South Bend, Indiana. Founded in 1852 and incorporated in 1868 under the name of the Studebaker Brothers Manufacturing Company, the company was originally a producer of wagons for farmers, miners, and the military.

Studebaker entered the automotive business in 1902 with electric vehicles and in 1904 with gasoline vehicles, all sold under the name "Studebaker Automobile Company". Until 1911, its automotive division operated in partnership with the E-M-F Company and the Garford Company of Elyria, Ohio. The first gasoline automobiles to be fully manufactured by Studebaker were marketed in August 1912. Over the next 50 years, the company established an enviable reputation for quality and reliability. The South Bend plant ceased production on December 20, 1963, and the last Studebaker automobile rolled off the Hamilton, Ontario, Canada, assembly line on March 16, 1966.

After 1966, Studebaker and its diversified units were acquired by Wagner Electric in 1967. Subsequently, Studebaker was then merged with the Worthington Corporation to form Studebaker-Worthington. The Studebaker name disappeared from the American business scene in 1979, when McGraw-Edison acquired Studebaker-Worthington. McGraw-Edison was itself purchased in 1985 by Cooper Industries, which sold off its auto-parts divisions to Federal-Mogul some years later. As detailed above, some vehicles were assembled from left-over parts and identified as Studebakers by the purchasers of the Avanti brand and surplus material from Studebaker at South Bend.