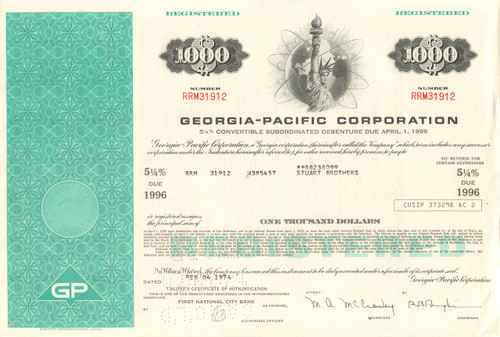 Uncommon piece with a nice vignette of the Statue of Liberty in front of a globe of the earth. Company logo is part of the left border printing. Issued and cancelled. Dated in the 1970's.

Georgia-Pacific LLC is an American pulp and paper company based in Atlanta, Georgia, and is one of the world's leading manufacturers and distributors of tissue, pulp, paper, toilet and paper towel dispensers, packaging, building products and related chemicals. As of Fall 2010, the company employed more than 40,000 people at more than 300 locations in North America, South America and Europe. It is an independently operated and managed company of Koch Industries.

The company continued to make a series of acquisitions, including US Plywood in 1987, Great Northern Nekoosa in 1990, and the Fort James Corporation in 2000. The Fort James Corporation was the result of a series of mergers of enterprises that included the Fort Howard Corporation, the James River Corporation and Crown-Zellerbach. In August 2001, Georgia-Pacific completed the sale of four un-coated paper mills and their associated businesses and assets to Canadian papermaker Domtar for US$1.65 billion.

On January 11, 2010, Georgia-Pacific signed an agreement to acquire Grant Forest Products' oriented strand board ("OSB") facility at Englehart, Ontario and the associated facility at Earlton, Ontario, as well as its OSB facilities at Clarendon and Allendale, South Carolina, for approximately $400 million. The transaction closed in July 2013, following Canadian regulatory review and US court approval under the Hart-Scott-Rodino merger review process. On June 19, 2014, Georgia-Pacific announced it will acquire SPG Holdings.