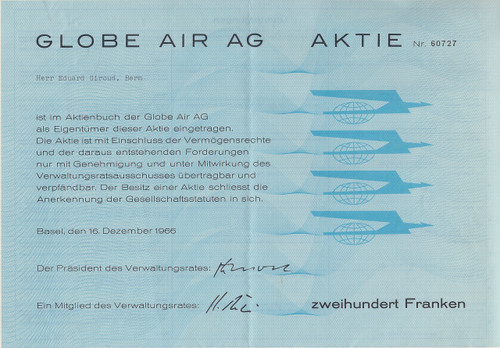 Very rare cert with great company logo's to the right.  Coupons attached at the bottom. Infamous for a charter flight crash. Dated December 1966, just before the company bankruptcy.

The Globe Air was a Swiss charter airline based in Basel. The company was founded in 1958. The main shareholder was Peter G. Staechelin. The fleet consisted initially of three machines of the type Airspeed AS 57 Ambassador , which of the British European Airways were taken. These aircraft have been replaced by a total of four machines of the type Handley Page HPR 7 Herald , which were later supplemented by two machines of the type Bristol Britannia 313th

The company flew mainly charter flights, outperforming 1963-64, two years after the start of flight operations, already the Balair . 1963 asked the Federal Office for the concession for domestic flights since the Swissair had ceased operations to Bern. In dealing with the Swissair to airport operations from Bern Balair for Swissair took over the flights from Bern, not without national fluster on Klungeleien Swissair with the air office.

The Nicosia Britannia disaster was the death of 126 passengers and crew on a Bristol Britannia of the Swiss airline Globe Air when it flew into the ground 3.5 km south of Nicosia Airport, in Cyprus. The Britannia was operating a charter flight bringing tourists from Bangkok in Thailand to Basel in Switzerland. The flight stopped at Colombo in Sri Lanka and then Bombay in India with the next stop due to be Cairo. The crew diverted the flight to Nicosia due to bad weather at Cairo. The aircraft was on the third attempt to land on Runway 32 in a violent thunderstorm when it flew into a hill near the village of Lakatamia and burst into flames. At the time of the crash, both pilots had exceeded their authorized duty time by three hours. The flight's first officer had less than 50 hours flying time in Britannia aircraft. Two German and two Swiss passengers survived; three of them were seriously injured and were treated at a United Nations field hospital near Nicosia, the fourth was reported to be unhurt

After the plane crash on April 20, 1967 the company announced bankruptcy in October 1967.