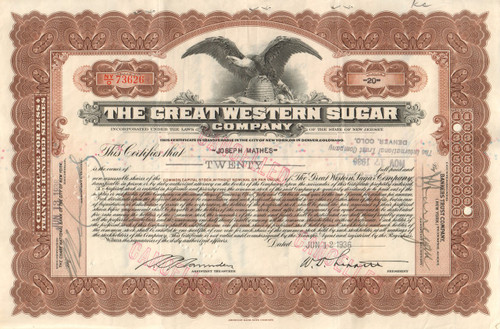 Very nice vignette of an eagle perched on  a bee hive.  Issued and cancelled. Dated 1936.  Cool collectible from the sugar beet industry in the West.

Its origins date from 1903 when Charles Boettcher founded the Great Western Sugar Company and opened a sugar beet plant in Loveland, Colorado and another in Greeley, Colorado.  The first sugar mill was built in Loveland, Colorado. The Company then expanded, built and acquired several additional facilities in Nebraska, Colorado, Wyoming, and Montana.  The Great Western Railway was organized in 1901 to serve the beet sugar industry and towns in Northern Colorado. While its main purpose was to transport beets, sugar, molasses, coal and lime rock, it also operated for passenger service from 1917-1926.

When the Utah Sugar Company approached Great Western Sugar Company in 1902, the companies agreed to allow Utah Sugar to expand into Idaho, provided Utah Sugar didn't expand into Colorado. This was likely on behalf of Henry Osborne Havemeyer, whose American Sugar Refining Company owned 50% of both companies. Great Western was sold to Colorado businessman Billy White, who in 1974 sold controlling interest in the Company to the Hunt Brothers organization.

The Loveland plant closed in 1985, when the company was purchased by the sugar firm Tate & Lyle, at which time the name was changed to the Western Sugar Company. In 2002, more than 1000 sugar beet growers purchased the company, creating the grower owned cooperative.

The organization is headquartered in Denver, Colorado. It has five refineries, located at Fort Morgan, Colorado, Scottsbluff, Nebraska, Torrington and Lovell, Wyoming, and Billings, Montana.