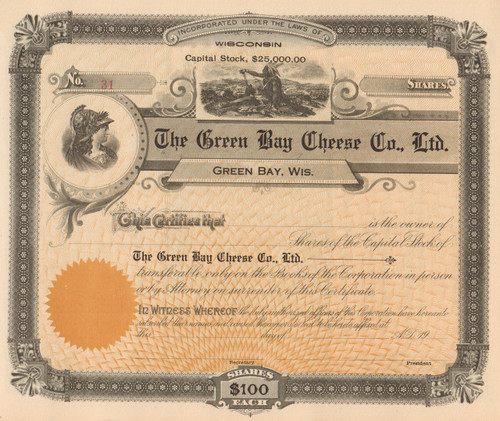 Yes, this is a real stock certificate from a real company!  Great double vignette of an allegorical female figure in a battle helmet to the left and an American Indian seated in front of city and country scenes.  Unissued but dated 1915 from issued examples.

Of course, Green Bay football fans have adopted the cheese heads moniker in homage to the state's famous food.   This company predates the Packers but the company was there when the football team got started.  This authentic stock certificate is the ultimate in Packer fan gifts.

The Fairmont Creamery Co. was founded at Fairmont, Neb. in 1884. In 1915 the firm began operations in Green Bay under the name Green Bay Cheese Co. Two years later the name was changed to the Fairmont Creamery Co. and the five-story building was constructed (200-216 N Broadway). At that time, the company expanded its operations to commercial cold storage, eggs and egg storage.

The firm in 1917 also had ice machinery in a one-story brick building on the site of the 1923 addition to the five story facility. In 1919 a creamery department was added and an addition was erected to house a power plant. In 1925 Fairmont purchased the green Bay Ice Cream and Dairy and expanded to the retail mild and ice cream fields. As of 1934, the company employed 140 persons. The company today makes milk, ice cream and cottage cheese under the "Fairmont" label.

The Packers predate the NFL. The team was founded in Green Bay on August 11, 1919, by two young players, George Calhoun and Curly Lambeau. The Indian Packing Plant, Lambeau’s employer, donated uniforms and the use of an athletic field. During the team’s first season in 1920, players earned their salaries by passing hats among spectators.

Lombardi built strong lineups on both sides of the line of scrimmage, and under his guidance the Packers won five league crowns from 1961 to 1967. They also won the first two Super Bowls, humbling two American Football League (AFL) champion teams: Following the 1966 season the Packers defeated the Kansas City Chiefs 35-10 in the 1967 Super Bowl, and a year later they beat the Oakland Raiders 33-14.

On the field, Bart Starr led the team. He collected three passing titles and two Super Bowl most valuable player (MVP) awards. Starr was among ten future Hall of Fame members who played for Lombardi—five each from offense and defense. Others included Paul Hornung and Jim Taylor. Hornung ranks among the greatest all-around talents ever to play the game. His 176 points scored during the 1960 season remain an NFL record for the most points scored in a single season. Taylor rushed for 1000 yards five times in his career.

During his nine seasons in Green Bay, Lombardi’s teams won more than 75 percent of their games, including nine of ten playoff contests. Lombardi’s .740 career winning percentage is the highest among coaches with at least 100 victories.

Green Bay’s success continued as Favre threw 39 touchdown passes to lead Green Bay to 13 victories and its second consecutive division title in 1996. In the playoffs the Packers captured the NFC championship and defeated the New England Patriots 35-21 in Super Bowl XXXI. The following season the Packers continued to dominate the NFC, with another 13 wins and the Central Division title. After defeating the Tampa Bay Buccaneers and the San Francisco 49ers in the playoffs, however, Green Bay faltered in the Super Bowl and lost to the Denver Broncos.