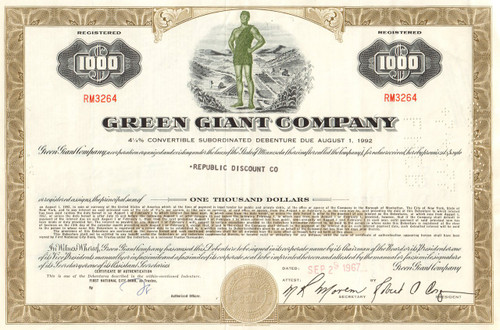 Amazing collectible certificate with a color vignette of the Green Giant himself in front of agricultural fields. Issued and cancelled. Dated in the 1970's.  Ho-ho-ho, Green Giant!

The Minnesota Valley Canning Company was founded in 1903 in Le Sueur, Minnesota. It used the brand name "Le Sueur Z" for canned vegetables starting in 1903; "Le Sueur" by itself was first used in 1933. The brand "Green Giant Great Big Tender Peas" was first used in 1925, and the figure of a giant was introduced three years later. The brand was created in response to the discovery of a new variety of pea, the Prince of Wales: they were, as Martin Sloan relates, "oblong, wrinkled, and, as peas go, huge.

Despite their size, they were tender, and had a special flavor and sweetness that couldn't be matched. The company went to the brands for which it canned and found that none of them wanted to sell the new peas. So Minnesota Valley decided to sell them under its own label. Rather than apologize for the size of the peas, they decided to emphasize it. They named the peas 'Green Giant.'"

The original mascot had very little in common with the familiar green figure of today: he was a scowling caveman wearing a bearskin rather than foliage (this original concept actually owed much to a dark Brothers Grimm fairy tale, "Der Bärenhäuter" – "Bearskin" In 1935 a young copywriter, Leo Burnett, revised the face of the brand: "he traded the bearskin for a leafy suit, gave the Giant a smile...and put the word 'Jolly' in front of the Giant's name." The Giant made his first television appearances in 1958. The booming "Ho, ho, ho" became the Giant's signature tagline in 1961. Since 1972 he has had a young apprentice, the Little Green Sprout, who represents the consumer.

The company was renamed to the Green Giant Company in 1950. In 1979 it merged with the Pillsbury Company; in 2001, the group was acquired by General Mills; all of its owners have been based in the Twin Cities area.

In 1964 The Kingsmen scored a hit at #4 on the Billboard Hot 100 with "The Jolly Green Giant," a novelty tune about the Giant's love life. In 1999 the marketing industry's leading publication, Advertising Age, posited a list of the twentieth century's top ten advertising icons, and placed the Green Giant third (behind the Marlboro Man and Ronald McDonald, and ahead of Betty Crocker, the Energizer Bunny, the Pillsbury Doughboy, Aunt Jemima, the Michelin Man, Tony the Tiger, and Elsie [the Borden cow]).