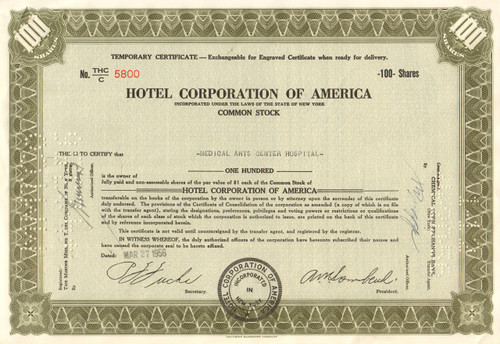 Great collectible stock certificate from a hotel and resort company.  Plain version of a temporary certificate exchangeable for an engraved certificate when ready to deliver.  Issued and cancelled. Dated in the mid-1950's.

In 1970, Hotel Corporation of America (formerly Childs) was again renamed, to Sonesta International Hotels Corporation (NASDAQ: SNSTA). As of 2009, the company operates 25 hotels on 3 continents, and owns several cruise ships, and is still led by the Sonnabend family. Sonesta International Hotels Corporation owns or operates 25 hotel, resort, and cruise properties in Bermuda, the Caribbean, Egypt, Italy, Peru, and the United States. Among Sonesta's properties are a tenth-century castle in Tuscany, Italy, and three cruise ships on the Nile. Although relatively unknown in the United States, Sonesta is one of the larger hotel chains in Egypt and the largest international hotel chain in Peru.

Joseph Sonnabend, the father of A.M. (Sonny) Sonnabend, emigrated from Austria to the United States when he was a boy. By age 18, Joseph owned a Boston jewelry store, later adding a pawnshop and another jewelry store. However, he taught his two sons that business was not the most important thing. Joseph told his sons that businesses come and go, but what people always need is houses, stores, and land. Joseph focused on real estate and built up his holdings, turning them over to Sonny in 1918.

Sonny increased the apartment and store holdings to $350,000 by 1927. By World War II, he probably was the leading apartment-house owner in Boston, with some 2,500 apartments. He had also worked his way to millionaire status. At age 49 he told his brother Leopold that he was going to retire.

Then a Boston real estate broker contacted Sonny about an enticing listing. The broker offered Sonnabend the Biltmore and Whitehall hotels, the Palm Beach Country Club, and three Palm Beach, Florida, properties in 1943 for $2.40 million. Sonny said owning hotels would put him in the "Big League." With seven partners he bought the three properties.

His decision proved profitable almost immediately. Conrad Hilton bought the Biltmore from him about a year later for nearly as much as he had paid for all three hotels. Noting that Hilton and Sheraton were both beginning to build chains, Sonny founded Sonnabend Operated Hotels in 1946. A year later he bought the Somerset Hotel on Boston's Commonwealth Avenue. Sonny bought the Edgewater Beach Hotel in Chicago in 1948. Later, rival Conrad Hilton beat him to the punch by adding the Waldorf-Astoria in New York to his holdings. In 1950, Sonny got revenge by buying the Van Sweringen properties in Cleveland with a partner, Royal Little, for $8 million. These properties included the 52 story Terminal Tower, three large office buildings, and the 1,000 room Hotel Cleveland. Three years later he added New York's Plaza Hotel to his properties.

Industry-wide hotel profits climbed in the early 1950s, creating a problem that got Sonnabend's attention--a large taxable income. John Bergen and Irving Felt, partners who controlled the Childs Restaurant Company, presented a solution. In 1956, Sonny sold several hotels to Bergen and Felt in exchange for stock in their money-losing restaurants. The $6 million tax loss helped offset Sonny's hotel profits. He leased the remainder of his hotels to a new entity, the Hotel Corporation of America, which became one of the country's first major hotel companies.

Throughout his career, A.M. Sonnabend benefited from good timing, business acumen, and some luck. In 1930, during the Great Depression, he had protected his apartment holdings by lowering rents for anyone who would sign a long-term lease. His move impressed Boston bankers (who then controlled a large percentage of the city's commercial real estate) enough that they began offering foreclosed properties to him. After the 1950 Van Sweringen purchase, Sonny recovered the entire down payment because the seller had not looked in the treasuries of the corporation and had left $1 million in surplus cash.