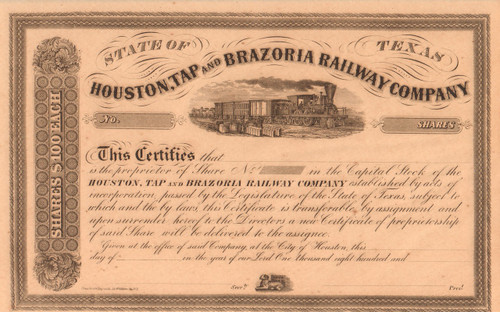 Rare Texas railroad stock collectible.  Interesting vignette of older steam train with freight in the foreground.  Unissued and not cancelled. Dated 18__. Circa 1856 from company records.

The Houston Tap and Brazoria Railway was chartered in 1856 to extend from Houston to West Columbia in Brazoria County. The railroad's nicknames were the Columbia Tap and the Sugar Road. The railway absorbed track from an earlier short-lived line and reached West Columbia in 1860. After the American Civil War, the railroad ran into serious financial difficulties and was sold to the Houston and Great Northern Railroad. It was the only railroad that failed to repay money borrowed from the Special School Fund and the only railroad that could trace its title to the State of Texas. The line operated as part of the Missouri Pacific Railroad until 1980 when it was bought by the Union Pacific Railroad.

In 1850 the Buffalo Bayou, Brazos and Colorado Railroad was chartered and in 1852 the company started construction. In 1853 the line reached Stafford and by January 1, 1856 the railroad ran from Harrisburg to Richmond. Worried that their city was being bypassed, the authorities in Houston desired to connect their city with Richmond by tapping into the B.B.B.&C. This was accomplished by building the Houston Tap Railroad from Houston south to Pierce Junction