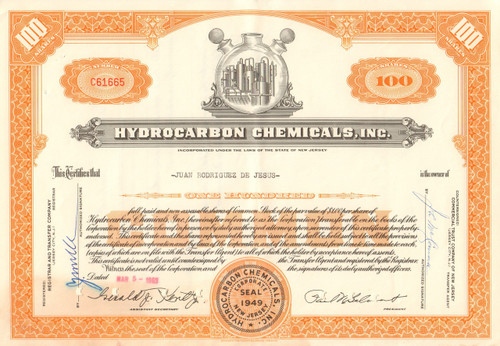 Hydrocarbon Chemicals, Inc. was incorporated in New Jersey in 1949 and had offices in Newark. The company also had oil properties in Texas. The company declared for Chapter 11 bankruptcy protection in 1964, and eventually emerged, but never really gained its footing.

Judge James A. Coolahan act­ed on an application by Joseph H. Stamler, attorney for some Hydrocarbon stockholders. Mr. Stamler had successfully argued last December for a transfer of Hydrocarbon's petition for reorganization from the jurisdic­tion of a Federal bankruptcy referee under Chapter XI to that of a Federal District judge under Chapter X of the Bankruptcy Act.

Andrew B. Crummy, speaking for the reorganization trustees, said a new offer has been received for the Texas assets from Zimet Brothers of New York and that he expected other corporations to make offers this week.