Illinois Power and Light circa 1930 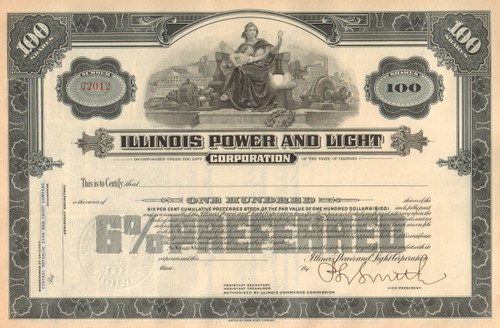 Illinois Power and Light circa 1930

Great vignette of allegorical female figure seated (lighted throne) with child in front of city and industrial scenes. Unissued and not cancelled. Circa 1930. Interesting gift idea.

Formed by the Illinois Traction Company to sell electricity to consumers.

The Illinois Traction System's generating plants also sold electricity to customers in many towns and cities serviced by the electric railroad. In the 1930s, the railroad and its electrical utility separated from each other. The formerly-affiliated electrical utility was spun off to form the Illinois Power and Light Company. Illinois Power provided electrical service to much of central and southern Illinois before its acquisition by Ameren. Consolidation into the parent firm occurred in 2004.

Ameren Corporation was created December 31, 1997 by the merger of Missouri's Union Electric Company  and the neighboring Central Illinois Public Service Company. It is now a holding company for several power companies and energy companies.

Prior to the formation of Ameren, the first major development in the history of its constituent parts occurred in 1929, when the Bagnell Dam was completed on the Osage River and generated almost 175 megawatts of hydroelectricity for Missouri's Union Electric Company. The dam also created the Lake of the Ozarks with 1,400 miles (2,300 km) of shoreline.

In 1931, Union Electric Light and Power sought additional generating sources (interurbans being one need) and the company began buying power from the Keokuk, IA dam, 150 miles (240 km) north of St. Louis. Union Electric later bought the dam, providing 134 megawatts of hydroelectricity carried over a longer distance than had ever been achieved before. By the 1950s Union Electric owned gas operations in and around Alton, Illinois, and acquired other utilities to become the third largest distributor of natural gas in Missouri.