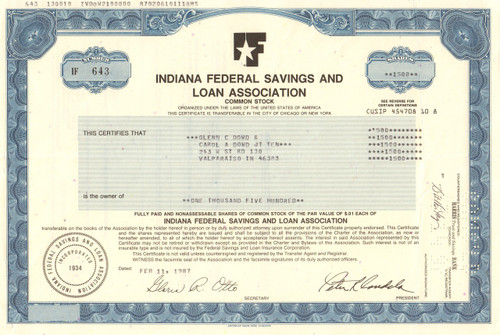 Established in 1934, this regional Indiana bank and is now part of Fifth Third bank. Fifth Third Bank is a U.S. regional banking corporation, headquartered in Cincinnati, Ohio at Fifth Third Center, and is the principal subsidiary of holding company Fifth Third Bancorp.  Fifth Third's unusual name is the result of the June 1, 1908, merger of Third National Bank and Fifth National Bank, to become the Fifth-Third National Bank of Cincinnati (the hyphen was later dropped).[While Third National was the senior partner, the merger took place when prohibitionist ideas were gaining popularity, and it is legend that "Fifth Third" was better than "Third Fifth," which could have been construed as a reference to three "fifths" of alcohol.  The name went through several changes over the years until March 24, 1969, when it was changed to Fifth Third Bank.  The company's main businesses include branch banking, commercial banking, consumer lending, payment processing, investment advising, and title insurance.