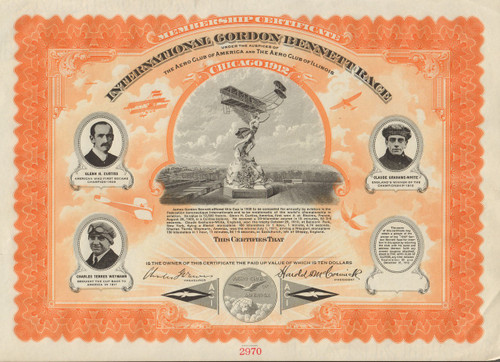 Amazing certificate from the International Gordon Bennett Race dated in 1912. The multiple vignettes include some of the first race winners -  Glenn H., Curtiss,  Claude Grahame-White , Charles Terres Weymann, and an empty frame for the yet unknown winner of the 1912 event. The center vignette is a picture of the winner's trophy that includes a model of the Wright Flyer. Imprinted Chicago 1912 above the center vignette. At the bottom, the certificates states "______ is the owner of this certificate . The paid up value of which is ten dollars."

The Gordon Bennett Aviation Trophy was an international airplane racing trophy awarded by James Gordon Bennett, Jr., the American owner and publisher of the New York Herald newspaper. The trophy is one of three Gordon Bennett awards: Bennett was also the sponsor of an automobile race and a ballooning competition.

The terms of the trophy competition were the same as those of the Schneider Trophy: each race was hosted by the nation which had won the preceding race, and the trophy would be won outright by the nation whose team won the race three times in succession. Accordingly, after Joseph Sadi-Lecointe's victory in 1920 the Trophy became the permanent possession of the Aéro-Club de France.

Following the success of the Gordon Bennett balloon competition, which had become the most important competition for the sport, Gordon Bennett announced a competition for powered aircraft in December 1908, commissioning a trophy from André Auroc, the sculptor who had created the trophies for both the balloon and automobile competitions. Formulation of the competition rules was entrusted to the Aéro-Club de France. It was decided that each competing nation would be allowed to field a team of three competitors.

The 1909 competition was held as part of the Grande Semaine d'Aviation held at Reims in France, and consisted of 2 laps of a 6.2 mile circuit. Like the subsequent competitions, it was not a direct race, but a time trial, with competitors taking off separately. As aircraft became faster and their engines more reliable, the distance to be covered was increased each year. The last official competition was held in 1920 in the French communes of Orléans and Étampes. Unlike those held before the First World War which were over short courses marked by pylons, the competition was held between two points 50 km apart because of the growing speed of aircraft.

The selection trial for the French team was held on the first day of the Grande Semaine d'Aviation. Hampered by gusty winds and rain which turned the grass flying-field to glutinous mud, many of the twenty entrants were unable to take off and none managed to complete the necessary two laps. Eugène Lefebvre, flying Wright biplane put up the best performance, nearly completing the course; Louis Blériot, who had managed to fly about 2.5 km in a Blériot XI put up the next-best performance. It was decided that the third place would be given on the basis of performance in the speed competition to be held that afternoon, and was taken by Hubert Latham.

The Wrights themselves had passed on an invitation to compete at Reims, though it seemed awkward since the Gordon Bennett Trophy was crowned with a large replica of a Wright Flyer. The Aero Club of America, which had sponsored the Scientific American trophy won by Curtiss a year earlier, turned to him. His aircraft was not as well developed as the Wright machines and while it was more maneuverable than the European aircraft, it was not nearly as fast.

The 1910 competition was held at the Belmont Park racetrack in New York as the culminating event of a week-long aviation meet. The 5 km course marked out for the competition attracted strong criticism from the competing pilots. Alfred Leblanc, captain of the French team, described it as a death-trap because of the obstacles which would hinder any pilot trying to make an emergency landing, and a tight turn less than 30 m (100 ft) from one of the grandstands was christened "Dead Man's Corner" by the press. However, the race proceeded as planned.

Contestants were permitted to start at any time during a seven hour period on the day of the race. Claude Grahame-White was first to take off at 8:42, flying a Blériot XI powered by a 100 hp Gnome Double Omega and completing his first lap in 3 minutes 15 seconds. He was followed by Alec Ogilvie flying a Wright Model R at 9:08 and Alfred Leblanc at 9:20. Leblanc, who was the chief pilot for the Blériot company, was flying a 100 hp Blériot XI differing slightly from Grahame-White's, with a different propeller and a reduced wingspan. Leblanc's aircraft was clearly faster: after four laps his time was 1 minute 20 seconds better than Grahame-White's and he completed his nineteenth lap after 52 minutes 49.6 seconds in the air, Grahame -White having completed the 20 lap course in 1 hour 1 minute 4.47 seconds. However half-way round the last lap Leblanc's engine stopped, either through fuel shortage or the breakage of a fuel line, and he had to make a forced landing, colliding with a telegraph pole but fortunately escaping serious injury.

Meanwhile Alec Ogilvie had been forced to land by engine problems after 13 laps after a delay of 54 minutes he took off again and eventually completed the course in a total time of 2h 26m 36.6s, good enough to gain him third place.

Walter Brookins, flying the Wright "Baby Grand", was about to take off when Leblanc crashed, and decided to fly to the scene of the accident to see if he could help. However shortly after takeoff a connecting rod broke and his aircraft was wrecked in the subsequent forced landing. Brooking was unhurt.[17] Hubert Latham took off at 10:59, but his attempt was plagued by engine failures, and he spent about four hours on the ground making repairs, eventually completing the course in 5h 48m 53s, an average speed of 28.6 km/h (17.8 mph).

Shortly before the latest permitted takeoff time John Drexel and John Moisant, both flying Blériot IXs, started their attempts. Drexel was forced to retire after seven laps, while Moisant completed the course in 1h 57s 44.8s after landing more than once with engine problems, securing second place.