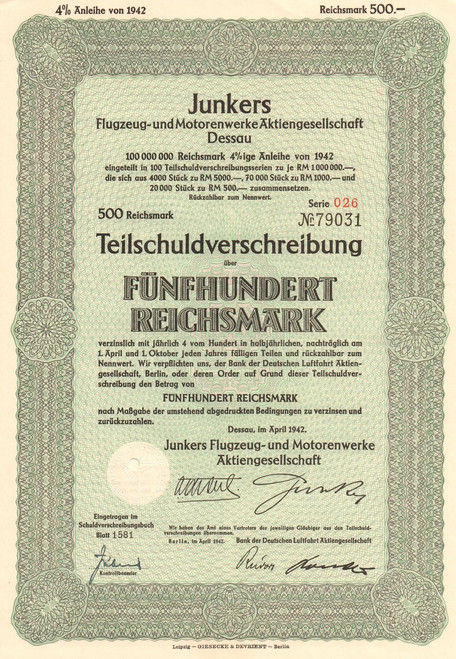 Rare historical collectible. Very elaborate printing in border and background.  Issued for 500 RM and cancelled. Dated 1942 in the text.

Junkers Flugzeug- und Motorenwerke AG (JFM, earlier JCO or JKO in World War I), more commonly Junkers, was a major German aircraft and aircraft engine manufacturer. It was founded there in 1895 by Hugo Junkers, initially manufacturing boilers and radiators. During World War I, and following the war, the company became famous for its pioneering all-metal aircraft. During World War II the company produced some of the most successful Luftwaffe planes, as well as piston and jet aircraft engines, albeit in the absence of its founder, who had been removed by the Nazis in 1934.

The history of Junkers aircraft production begins with the Junkers J 1 mid-wing monoplane. Research for this aircraft began in 1914 and was interrupted by the start of the First World War. The prototype aircraft, named the Blechesel (Tin or Sheet-metal Donkey), was completed in very late 1915 after the outbreak of the war.

In the immediate post-war era, Junkers used their J8 layout as the basis for the F-13, first flown on 25 June 1919 and certified airworthy in July of the same year. This four passenger monoplane was the world's first all-metal airliner. Twenty-five of these airplanes were delivered to North American customers under the Junkers-Larsen affiliate and were used primarily as airmail planes.

The Treaty of Versailles signed only days after the F-13 flew, initially forbade any aircraft construction in Germany for several months. After that span of time only the design of civilian aircraft was permitted to Germany. Junkers developed a series of progressively larger civil aircraft. With the expiration of treaty restrictions in 1926, Junkers introduced the Junkers W33 and Junkers W34 series which fund significant commercial success.

The Nazi party came to power in Germany in 1933, and all German aviation development was shifted away from long-range civil aircraft types. Hugo Junkers himself was forced to transfer all his patents to the Nazis, who doubted that Junkers (a socialist pacifist) would comply with their plans. Shortly after, his holdings were expropriated and he was placed under house arrest. Military aircraft production was begun by the company in the 1930s and eventually monopolized all its resources. Perhaps the most notable design was the Junkers Ju 87 Stuka dive bomber, one of the Luftwaffe's most effective aerial weapons in the early-war period and continually used for bombing attacks as an integral part of the Blitzkrieg strategy. Perhaps even more successful was the Junkers Ju 88, the primary medium bomber of the German forces. It was used in practically every role imaginable; level bomber, shallow-angle dive bomber, night fighter, and bomber destroyer, as well as in anti-shipping raids.

The Junkers company survived the Second World War and was reconstituted as Junkers GmbH and eventually merged into the MBB consortium (via joint venture Flugzeug-Union-Süd between Heinkel and Messerschmitt in 1958). Messerschmitt ended the joint venture in 1965 by acquiring control of JFM AG and absorbed within Messerschmitt in 1967. Within West Germany, Junkers GmbH was engaged in research on the future of aerospace transportation during the fifties and early-1960s.