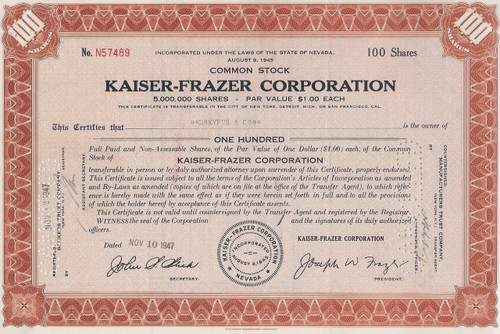 Uncommon automotive stock certificate from the Kaiser-Fraser Corp.  Nicely engraved by the Security Banknote Company and available in two colors. Some ink stains in the outside borders (not seen in scan) but will be covered by matting when framed.

The Kaiser-Frazer Corporation was the result of a partnership between automobile executive Joseph W. Frazer and industrialist Henry J. Kaiser. In 1947, the company acquired the automotive assets of Graham-Paige, of which Frazer had become president during WWII. Kaiser-Frazer was the only new US automaker to achieve success after World War II, if only for a few years.

The company was founded on July 25, 1945 and,in 1946,displayed prototypes of their two new cars at the Waldorf Astoria Hotel in New York City. The Kaiser was of an advanced front wheel drive design while the Frazer was an upscale conventional rear wheel drive car. The production costs and the limited time available prevented the front wheel drive design from entering production, so the new 1947 Kaiser and Frazer shared bodies and powertrains. Being some of the first newly designed cars on the market while the "Big Three" were still marketing their pre-war designs, the Kaisers and Frazers made an exciting entrance. Kaiser and Frazer continued to share bodies and engines through 1950 with different exterior and interior trim.

Henry Kaiser had no automotive marketing experience while Joseph Frazer did, having been president of the Graham-Paige Corporation prior to WWII. Henry Kaiser believed in pressing forward in the face of adversity; Joseph Frazer was more pragmatic. As the market for K-F products slowed in 1949 with the introduction of new designs from the Big Three, Kaiser pushed for more production creating an oversupply of cars that took until mid-1950 to sell. Kaiser and Frazer conflicted until Frazer left the company in 1951, and the Frazer nameplate was dropped after a 10,000 unit production run. In 1952 the Kaiser-Frazer Corporation was renamed Kaiser Motors Corporation and continued building passenger cars through 1955.

In 1953 Kaiser bought the ailing Willys-Overland company and merged the Kaiser and Willys operations under the name Kaiser-Willys Corporation. The decision was then made to exit the passenger car market, which was accomplished at the end of the 1955 model year. By 1956, Willys Motors built only utility vehicles, many for export, and was turning a healthy profit.

In 1970, the Kaiser Jeep Corporation, as the company had been renamed in 1963, was sold to American Motors Corporation which continued to manufacture Jeep vehicles until AMC itself was purchased by Chrysler in 1987.